Since 2000 Iowa property taxes have increased 122 percent more in comparison to population, inflation, and the cost-of-living adjustment for Social Security. The Tax Foundation ranked Iowa with the 10th highest property tax burden in the nation. 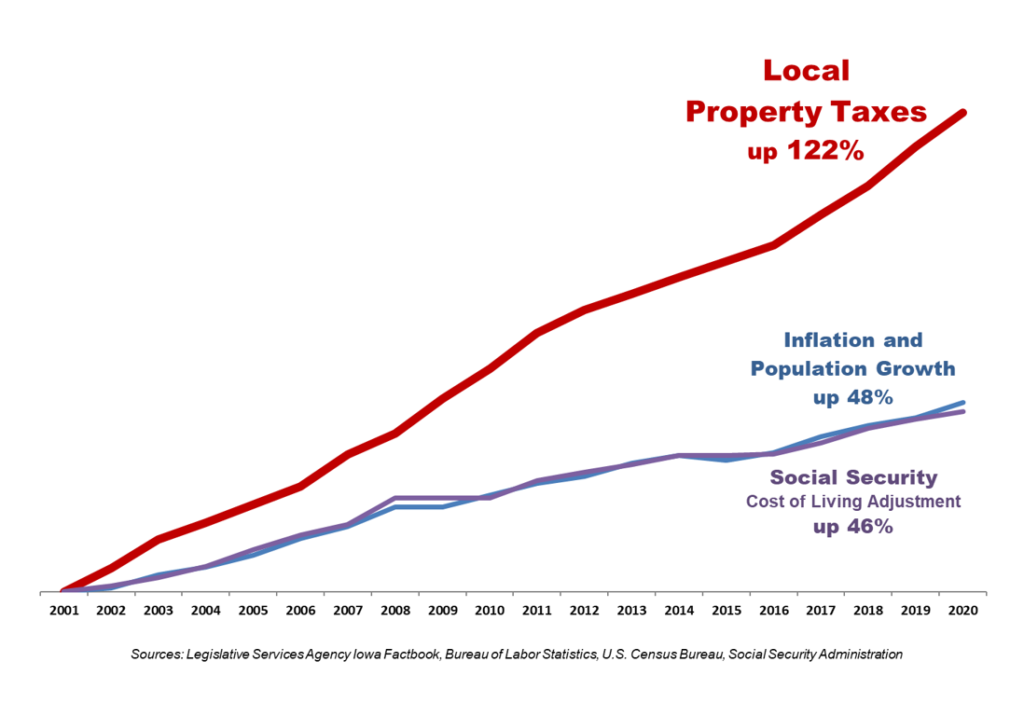 Local government spending is at the heart of high property taxes. Too often blame is placed on the county Assessor, but taxpayers must focus their attention on spending. Whether it is property or income taxes, spending drives high taxation. In addition, many property taxpayers in Iowa are often left wondering why they are told taxes have decreased, but their property tax bills are higher.

This is because many local governments can easily hide behind increased assessments and collect the windfall, while the Assessor takes the blame. This has created an “honesty gap” in property taxes. Without addressing local government spending it will be difficult to implement any property tax relief. Property taxes are also a form of wealth tax.   For example, if the value of a home increased by 10 percent, it does not mean the property owner has a 10 percent increase in savings to cover their property tax.

In 2019 the Iowa legislature passed a property tax accountability and transparency measure. This new law requires local governments such as counties and cities (school districts were not included) to hold a public hearing if the proposed budget increases more than 2 percent above the previous year, and a supermajority vote for the increase to be enacted. This new 2 percent “soft cap” is meant to control the growth of property taxes and requires local governments to provide more transparency within the local budget process. 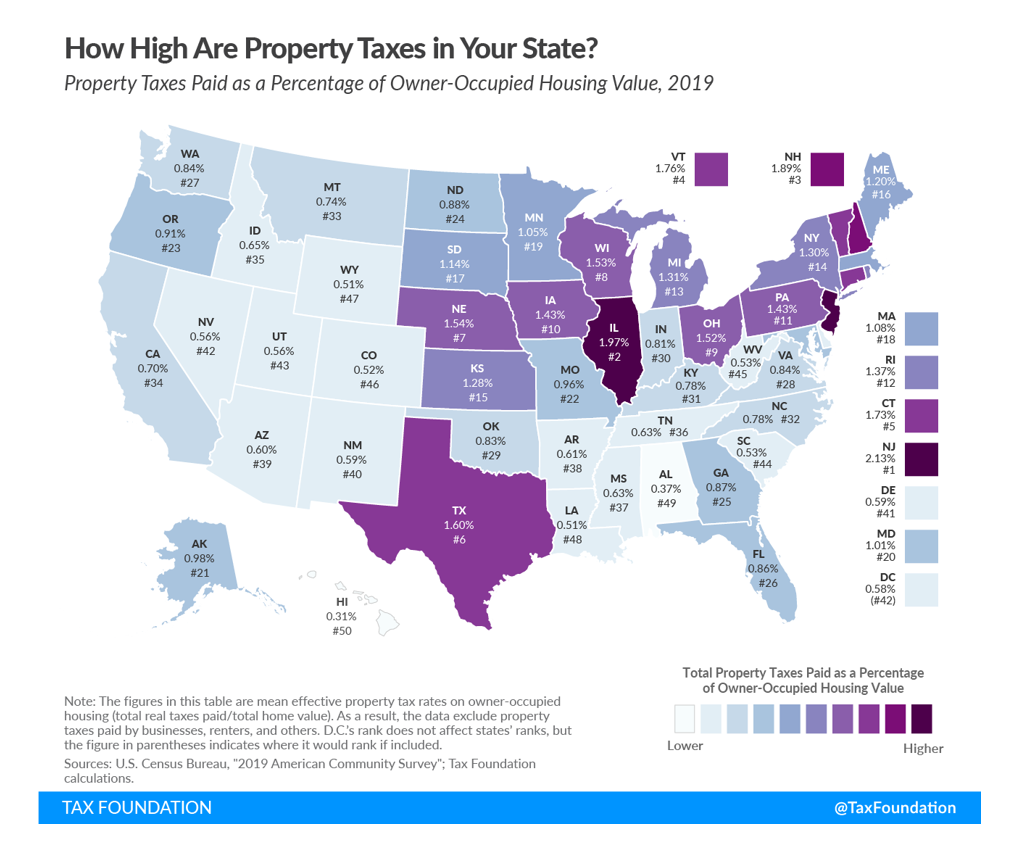 Utah’s Truth-in-Taxation law is a revenue-based limitation, which means as valuations increase property tax rates decrease. The Truth-in-Taxation law guarantees that each taxing entity receives the same property tax revenues as the previous year including new growth. This prevents local governments from getting a windfall because valuations have increased.  “Local governments should not receive an automatic 12 percent revenue increase simply because property valuations increased 12 percent,” wrote Howard Stephenson, who recently retired as President of the Utah Taxpayers Association and is a former state Senator.

Through the Truth-in-Taxation process, local governments must justify why they want to increase taxes for additional spending, forcing them to be more transparent as to why they need additional tax revenue. A crucial aspect of Utah’s law is a direct notification requirement, where notices are sent to taxpayers, providing information on the proposed tax increase and how it will impact their tax bill. It also includes the date, time, location of the Truth-in-Taxation budget hearing. This extensive public notification and hearing process has been successful, and taxpayers in Utah actively participate in Truth-in-Taxation hearings.

Rusty Cannon, President of the Utah Taxpayers Association, argues that Utah’s law provides “sunlight” on the local government budgeting process. Cannon noted that while “decisions can be made to raise taxes, the law simply requires that it’s done in the sunlight—that you essentially need to make your case to voters, to taxpayers, as to why the increase in revenue is needed.”

Truth-in-Taxation forces accountability and it makes taxing authorities think twice about raising taxes. “You do it in a public setting, you notify them of what their liability increase will be on a parcel-by-parcel basis, so everybody has that full disclosure. So, there’s no automatic inflation that creeps in. There’s no automatic step-up. There’s no automatic windfall if property values increase. It keeps a lid on those property taxes. However, if they do want to raise them, they simply have to do it in that public process,” stated Cannon.

Utah’s Truth in Taxation law has effectively controlled the growth of its property tax assessments and overall burdens. The law requires that citizens be notified of the intent to raise taxes and invited to a public hearing to voice concerns. This also allows local units of government to make their case if they feel additional revenue may be needed. If a local government decides they want to increase spending, the Truth in Taxation process requires local elected officials take recorded votes to authorize the new rates or assessments.

Recently Kansas and Nebraska passed property tax reform laws based on Utah’s Truth-in-Taxation. The Kansas law serves as the closest example to Utah’s law because of its strength. Dave Trabert, President of the Kansas Policy Institute, argues that the new Kansas law “closes the property tax honesty gap.” “Local officials can no longer pretend to ‘hold the line’ on property taxes while taking in large increases from valuation changes. Now, they have to be honest about the entire tax increase they impose,” stated Trabert.

Specifically, the Kansas law repeals the property tax lid, which was largely ineffective because of the numerous exemptions and starting in 2021 mill rates will be reduced so that new valuations will bring in the same amount of property tax. If a taxing authority wants to increase property taxes, they will be required to hold a public hearing and vote on the potential increase. This also includes a direct notification process, which must include:

Kansas’s Truth-in-Taxation law is already working for taxpayers. Several cities and counties are not going to increase their property taxes next year, while others are looking at small increases.

Policymakers in Iowa should seriously consider following the example of Utah and Kansas and pass a Truth-in-Taxation measure that requires a strong direct notification requirement. Taxpayers deserve to know how much their property tax bill will increase and Utah and Kansas are demonstrating that Truth-in-Taxation laws force more “sunlight” and accountability on the local government budget process.

Public officials should not be afraid of Truth-in-Taxation. Providing more accountability and transparency will only improve local government.  “Just as someone who doesn’t want to be seen in a swimsuit should avoid the beach, those that don’t want to make decisions in public should not run for public office,” stated Cannon in referring to transparency in government.

“And that is the idea behind Truth in Taxation, is that you can make the decision, you just have to do it in the open,” noted Cannon. In addition, elected officials should explain to taxpayers why they need additional spending. Too often governments, at all levels, forget that it is the money belongs to the hard work of the taxpayer.

In the last few years Governor Kim Reynolds and the legislature have made significant progress in starting to lower Iowa’s high tax rates. Much work remains in lowering individual and corporate income taxes to make Iowa’s economy more competitive. The same is true for property taxes. High property taxes deter economic growth and provide incentive for people to either leave or decide not to locate to Iowa.

It’s time to implement a proven solution to bring property tax relief to Iowa taxpayers. Other reforms such as property tax freezes for certain taxpayers or assessment limitations may sound promising, but these “solutions” will not solve the problem. The goal should be property tax relief for all Iowans and Truth-in-Taxation will benefit all taxpayers.