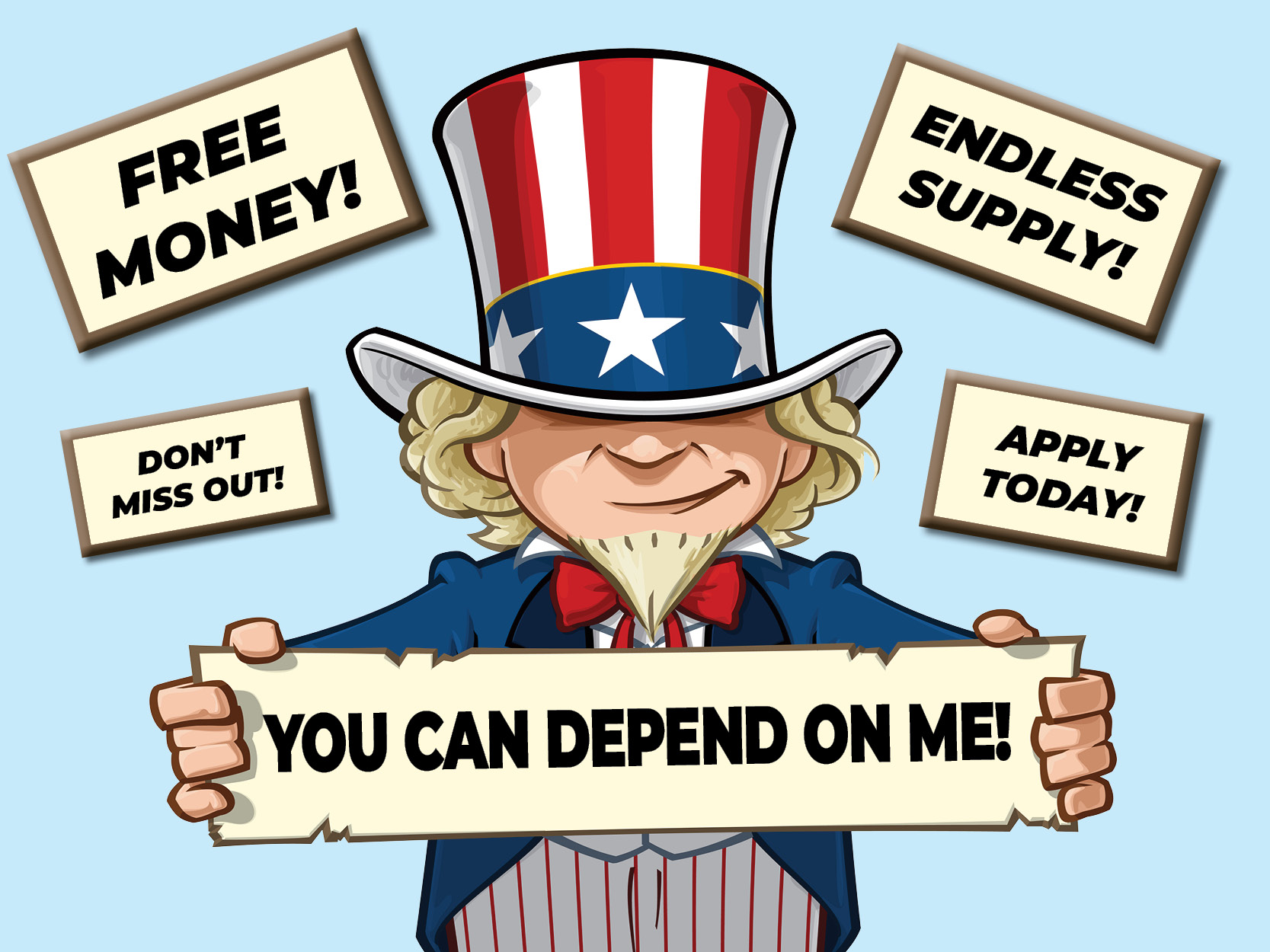 Uncle Sam to the Rescue?

David Kennedy, prominent historian and Stanford University professor, in an interview with Governing discussed the COVID-19 (coronavirus) emergency in relation to the Great Depression. In that interview he stated, “[President] Calvin Coolidge said that if the federal government went out of business, the average person wouldn’t notice for six months, except for the post office. Now, the federal government is twice the size of the states all put together.”

Clearly the federal government has become large — a leviathan creature — as a result of growing beyond its constitutional limitations. The COVID-19 emergency is challenging the foundation of federalism, that is, the division of power between national and state governments. Since the outbreak of the virus, there has been a debate between many state governors and President Donald Trump over relief policy, shelter-in-place orders, and even the criteria to be used to reopen the economy. President Trump established guidelines to reopen the economy, which many states, including Iowa, are utilizing.

Christopher DuMuth, a Distinguished Fellow at the Hudson Institute, recently wrote that “the federal response rests largely on state and local government and private enterprise, with a wave of deregulation clearing the way.” Governor Kim Reynolds, as an example, did not issue a general shelter-in-place order, but Iowa followed and is following the guidelines established by the Centers for Disease Control. In addition, Governor Reynolds is reopening the economy in phases. COVID-19’s impact is different in each state, just as certain parts in Iowa have seen less cases than others, and states should have the flexibility to reopen the economy based on what is actually occurring in their respective state. In other words, Iowa is different than New York.

“The history of the United States has been a roller coaster on the question of state versus national sovereignty,” wrote Clay Jenkins, editor-at-large at Governing. States and federal/national government have competed for both political power and financial resources. This often raises complex constitutional questions.

Nevertheless, Iowa and other states have become dependent on the federal government support. Iowa’s $8 billion state budget is dependent on the equivalent in federal aid to help fund numerous programs. The federal government can impose both funded and unfunded mandates on the states.  This growing dependency on Uncle Sam is dangerous not only because federal funds could be eliminated, but often these funds come with a cost, that is, it increases state spending to comply with federal rules.

Auditor of State Rob Sand reported that Iowa received $9.3 billion in federal funding in fiscal year 2019. The $9.3 billion was a $350 million or 3.9 percent increase over the prior year. Most of the federal funding goes to Medicaid ($3.5 billion), but Iowa administers an estimated 600 federal government programs. As a result of the COVID-19 pandemic emergency Iowa has received at this time $2.5 billion in federal government assistance as a result of the aid packages passed by Congress. Iowa’s federal stimulus and relief funds as a result of COVID-19 is shown here: 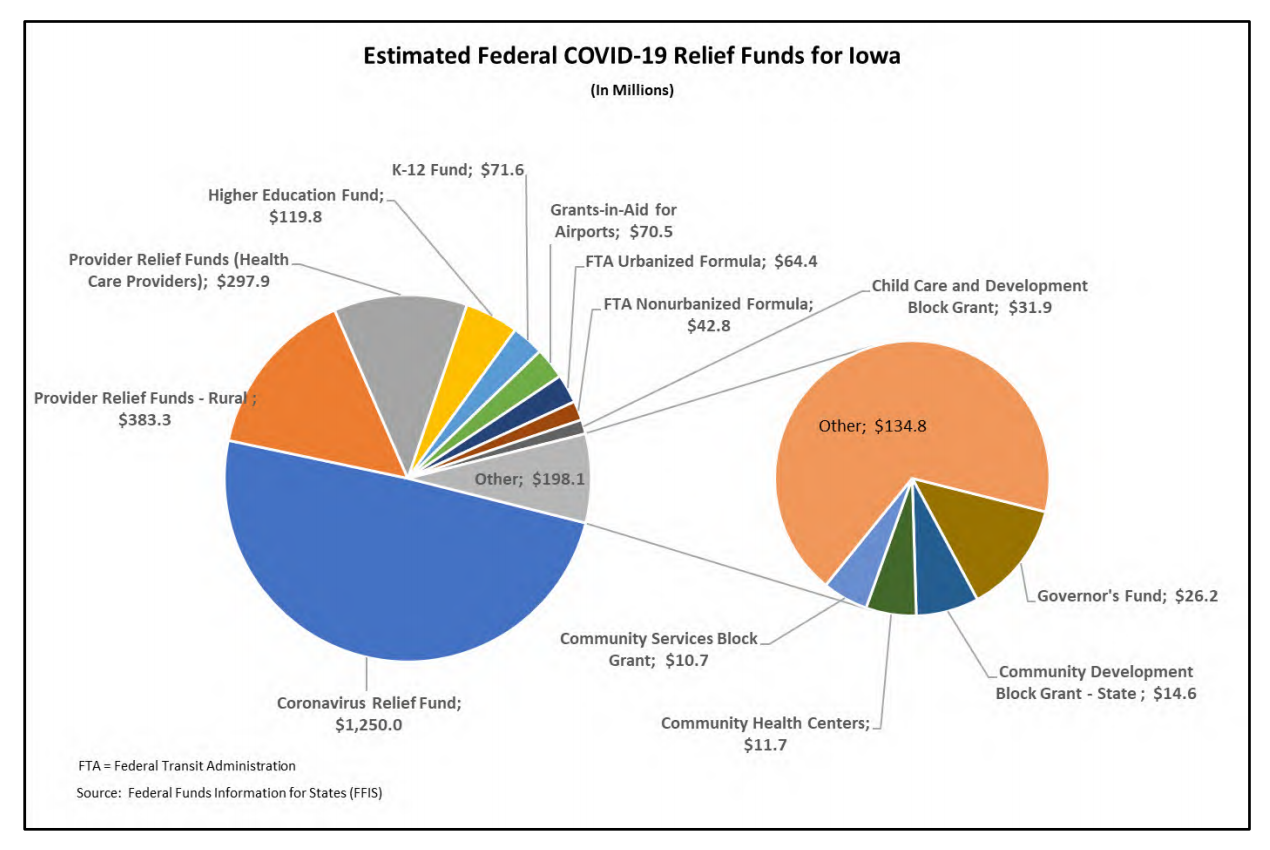 "The federal legislation allocates an estimated total of $2.530 billion to the State of Iowa. Direct stimulus payments to taxpayers and nongrant funding are not included in this figure. The following chart shows the total estimated federal fund relief allocated to the State and local governments."

The coronavirus (COVID-19) health pandemic and the resulting economic shutdown across the nation has resulted in a massive effort by the federal government to stimulate the economy. Larry Kudlow, Director of President Donald Trump’s National Economic Council, estimates combined relief and stimulus from both the federal government and the Federal Reserve is $9 trillion.

In order to support the economy and to provide economic relief to states, individuals, and businesses, Congress passed the $2.2 trillion CARES Act. In terms of state aid from the CARES Act and other federal stimulus measures, Iowa is expected to receive $1.7 billion.

The CARES Act is not the only federal money to help the states regarding COVID-19 relief. Prior to passing the CARES Act, Congress approved both an $8.3 billion and a $100 billion relief packages aimed at fighting COVID-19 and providing both health and economic support. The most recent stimulus is the $500 billion aid package that Congress passed to support small business.

In addition to the relief and stimulus measures provided by the federal government, the Federal Reserve has also provided support. “To ensure the flow of credit to these cash-strapped governments, the Federal Reserve has embarked on a previously unthinkable act: creating up to $500 billion in new fiat currency and lending it directly to states, cities, and counties through its Municipal Liquidity Facility.,” wrote Joel Griffith, a Research Fellow at The Heritage Foundation.

Rachel Greszler, Research Fellow in Economics, Budgets, and Entitlements at The Heritage Foundation, noted that state and local governments will also benefit from the federal stimulus funds being provided to businesses and individuals. Specifically, Greszler points to the $377 billion in small business relief, $293 billion in direct relief aid to individuals, and $268 billion in increased unemployment insurance benefits.

Opponents of “bailout” argue that the federal government has already provided substantial economic relief and that relief should have a chance to work before more is provided. Some of the loudest voices in favor of a “bailout” come from progressive “Blue States” such as Illinois, California, and New York, which prior to emergence of COVID-19 were in substantial fiscal trouble. Ernie Goss, a economist at Creighton University argues that “it’s a bailout of the overspending of California, Illinois, New York, Connecticut, and Massachusetts and other state economies.”

Further, Goss notes that “state and local governments are overspending, Iowa and Nebraska and other states in this part of the country have been more restrained in the growth.” Iowa has been following sound budget principles and when COVID-19 struck, the budget was in a strong position with $800 million in budget reserves and a surplus of $200 million.

In addition, critics argue that a “bailout” would violate constitutional principles of federalism. “Whenever you have that federal influence, of course, states cede control to the federal government, and these strings that come with these federal dollars oftentimes outlive the federal dollars, as we’ve found out with the last time we had a bailout of the states during the Obama era. I think it’s just a dangerous precedent to set that the states would look to the federal government to be their solution for problems that they are well-equipped to handle themselves,” argues Jonathan Williams, Chief Economist at the American Legislative Exchange Council (ALEC).

Finally, critics argue states should be allowed to have more flexibility with CARES Act relief. In other words, Iowa should have greater flexibility in how to use the $1.7 billion in federal aid Allowing greater flexibility to utilize these funds would help states with revenue shortfalls and provide aid to local governments. Senator Joni Ernst (R-IA) recently noted that “there is very little flexibility within those dollars.” “We would like to see the dollars that have already gone into those states be used to help bridge gaps that communities are facing because of loss of revenue,” argued Senator Ernst.

Regardless of how the debate over a state “bailout” is resolved, it is clear that the federal government will continue to impact and even shape state policy. Uncle Sam has responded to the COVID-19 economic crisis in an unprecedented fashion, but how long can the federal government continue to spend with a $24 trillion national debt and an estimated $4 trillion budget deficit in 2020?

No matter what decisions Congress makes, Iowa will be impacted. Nevertheless, Iowa must be prepared when Uncle Sam is no longer able to provide generous support to our state budget. J. R. R. Tolkien’s Lord of the Rings tells the story of how the ring entranced its possessor with its power, while at the same time it was also a curse. The same can be said of the lure of federal funds to the states. At this time, Iowa would be better served if Congress allowed the state to have greater flexibility with CARES Act funds.