Iowa’s economy is in strong condition. Problems remain, such as the need for more workers to fill the thousands of open jobs throughout Iowa. Nevertheless, thanks to sound conservative fiscal policies from Governor Kim Reynolds and the legislature, the state is on a solid foundation. Conservative budgeting and pro-growth tax reforms are creating a stronger economy. However, national economic headwinds are creating problems and it appears more likely that an economic recession is imminent.

The unemployment rate in Iowa continues to fall. In May, the unemployment rate was 2.7 percent, which is a few points lower than 3 percent in April. “The May report is outstanding and welcome news!” stated Beth Townsend, Director of Iowa Workforce Development. “Every month that passes brings us closer to Iowa’s pre-pandemic employment level. But our real goal is higher. We want to continue to accelerate the recovery and get as many of Iowa’s 85,000 open jobs filled as quickly as we can,” noted Townsend. 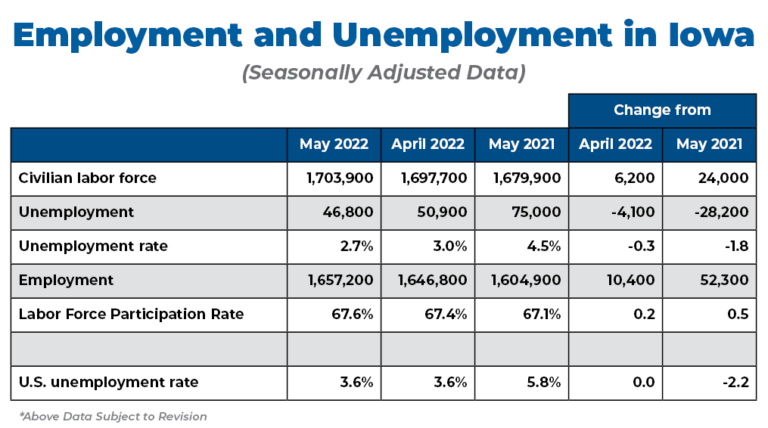 Regionally, economic confidence is shaky. Creighton University’s Mid-American Index, which surveys the Midwest economy, found that “six of ten survey participants expect the economy to worsen in the next 6 months.” 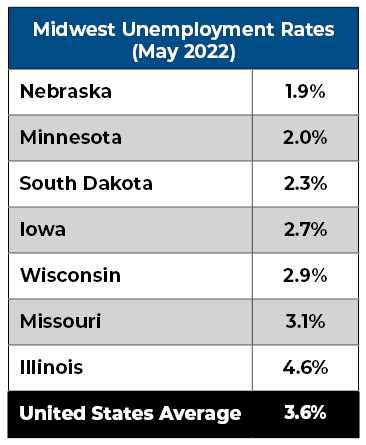 “Creighton’s monthly survey results indicate the region continues to add manufacturing activity at a solid pace, but with significant, and rising inflationary pressures. Supply chain disruptions remain the greatest challenge for the rest of 2022, according to supply managers,” said Ernie Goss, PhD, director of Creighton University’s Economic Forecasting Group and the Jack A. MacAllister Chair in Regional Economics in the Heider College of Business.

Iowa Workforce Development reported that financial activities added the most jobs in May, while manufacturing added additional jobs. “Manufacturing establishments continued to grow their payrolls this month and are 8,100 jobs higher than last year’s mark,” noted Workforce Development. Leisure and hospitality continue to add jobs, but these sectors continue to struggle. 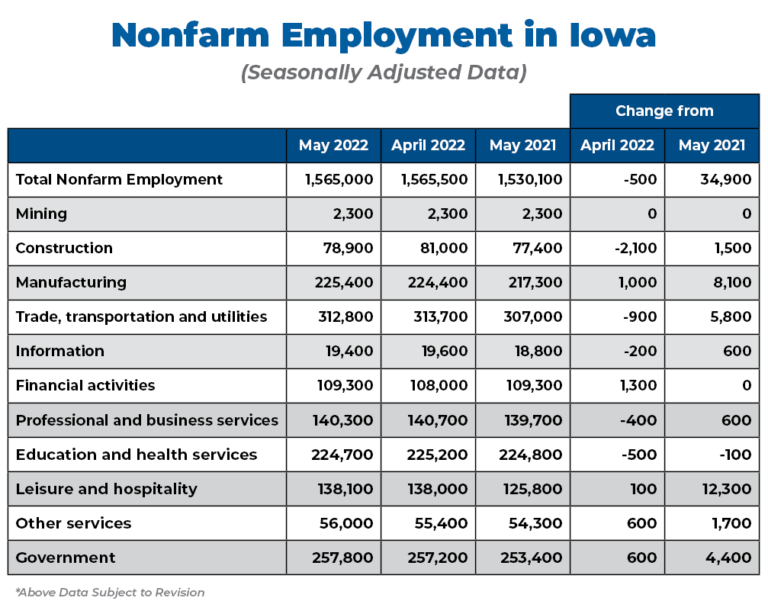 The May report showed that construction lost jobs, which could be a result of supply-chain issues and projects being put on hold. In addition, trade and transportation, health care, education, and professional and business services all saw job decline in May.

“Both durable and non-durable goods manufacturers in the state are growing at a solid pace with companies linked to the farm economy expanding at a healthy rate. The state’s leisure and hospitality industry has benefited from this healthy growth, but employment in this industry remains 8,300 jobs (5.7%) below pre-pandemic levels,” stated Goss in referring to Iowa’s job situation.

The national unemployment rate remained at 3.6 percent for May. Iowa’s lower rate is good news, but the national economic trends are creating substantial concerns. Rising inflation and interest rates are pushing the economy closer to recession. The Wall Street Journal reported that a recent survey of business CEOs found that 60 percent believe that we either are currently in or will soon be in a recession.

“When asked about their economic outlook, approximately six of ten supply managers expect a downturn in economic conditions in the next six months,” stated Goss.

Rising inflation and interest rates will hurt every Iowan, especially those in the lower- and middle-income groups. Iowans are paying more for groceries and gasoline among other necessities and the inflation is reducing the amount of money they can put toward savings. The continued supply-chain crisis is also causing economic disruptions.

“We have been anticipating a major, negative economic correction; and we believe the major negative economic correction has started,” stated one supply manager who was surveyed in the Mid-American Index. The Index found that “approximately two-thirds of supply managers expect supply chain disruptions to remain the greatest economic challenge to their business for the remainder of 2022.”

The direct cause of this inflation is massive spending by the federal government and the Federal Reserve’s dangerous policy of printing money through expanding their balance sheet. President Joe Biden has blamed inflation and high gasoline prices on Russia for their military aggression against Ukraine, but this is false.

“For all the talk of fighting inflation, the Federal Reserve printed a fresh $18 billion in the past two weeks. Total “assets” (all purchased with Fed created cash) bearing $9 trillion. Increase since the pandemic = $50,000 per family of four in the US,” stated Joel Griffith, a research fellow in the Thomas A. Roe Institute for economic policy studies at The Heritage Foundation.

“Yet before anybody heard of Vladimir Putin going into Ukraine, your excessive spending and borrowing, which was monetized by the Fed’s money printing, has now landed us most recently with an 8.6 percent consumer price index, with gasoline up 49 percent, food up 10 percent, electricity up 12 percent, and new cars up 13 percent. Just saying, sir, those are life-changing numbers,” wrote Larry Kudlow, who served as Director of the National Economic Council in the administration of President Donald Trump, in response to President Biden.

Further, Kudlow wrote that “middle-income working people will probably have something like a $5,000 increase in their cost of living in the months ahead. They cannot afford it. Their inflation-adjusted real wages have dropped 3 percent.”

“In other words, your reckless spending spree means that people are working harder and getting paid less. Look in a full-length mirror and what do you see? You see the very body that has decimated the middle class with an inflation tax,” stated Kudlow.

It is not just consumers that are getting hit hard by inflation. The escalating fuel prices are impacting the cost of transportation that will impact trucking and agriculture. President Biden and the Democrat’s foolish and radical “green” energy program has caused the spike in fuel prices by declaring war on fossil fuels.

Iowa has already entered into hot and humid weather and Iowans are being told to ration “electricity” because rolling blackouts may occur.

What is happening to our country?

Some of the survey respondents to the Mid-American Index demonstrate the growing frustration over current economic policy, a cultural decline in work ethic, and a growing pessimism about the economy. Some of the reactions included:

These reactions are just a sample, but they demonstrate the growing concerns that the nation at large is confronted with some serious economic and cultural problems.

Iowa’s unemployment rate is indeed good news, but the national economy and the prospect of a recession remain a serious threat.