What Would Hamilton Say About China?

What Would Hamilton Say About China?

A few recent headlines have passed without much attention. The first story is our national debt has reached $30 trillion, while the second is the trade deficit for 2021 hit a record  $859.1 billion. Both stories were virtually ignored because the American people have just become numb to the topics, though they may be missing some wider ramifications, especially when it comes to trade.

Of the two issues, the trade deficit receives less attention than the national debt; many policymakers on both sides of the philosophical divide seemingly regard it as meaningless. The trade deficit is simply the amount to which imports into the United States exceed what we export in a given year. Last year’s $859 billion trade deficit is a 27 percent increase over the previous year.  One factor that contributed to that increase was inflation as consumers purchased more goods at inflation-fueled prices. Some of the leading imported goods included computers, cell phones, toys, furniture, autos, and medical supplies. Since 2001 our nation “has rung up over $12 trillion dollars in accumulated global deficits.” 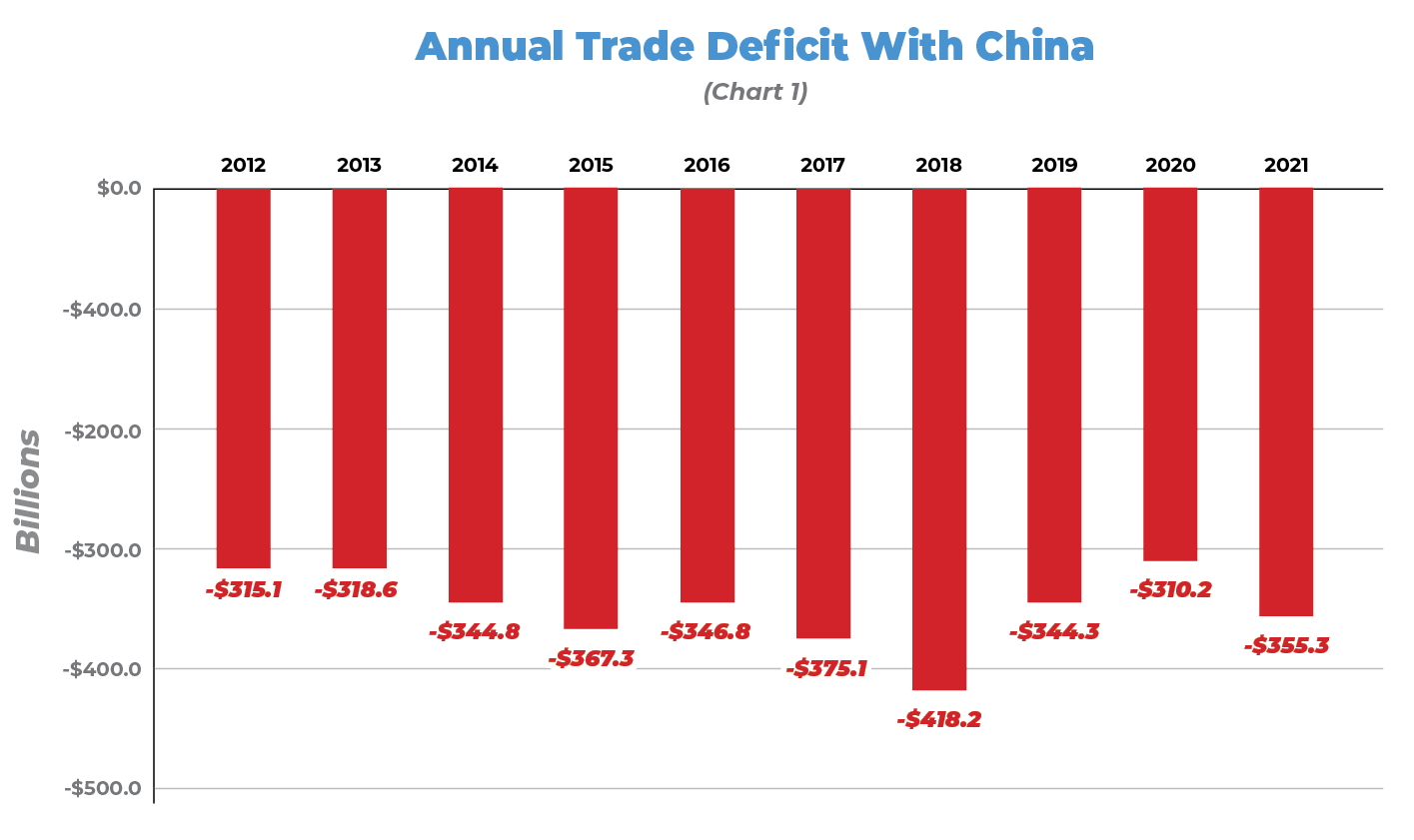 As part of our total trade deficit, the imbalance with China alone was $355 billion, which marked a full decade of that annual deficit hitting over $300 billion (Chart 1). In fact, China’s exports to the United States have risen 31 percent since 2018.  The United States also ran a considerable trade deficit with the European Union, among other trading partners (Chart 2). 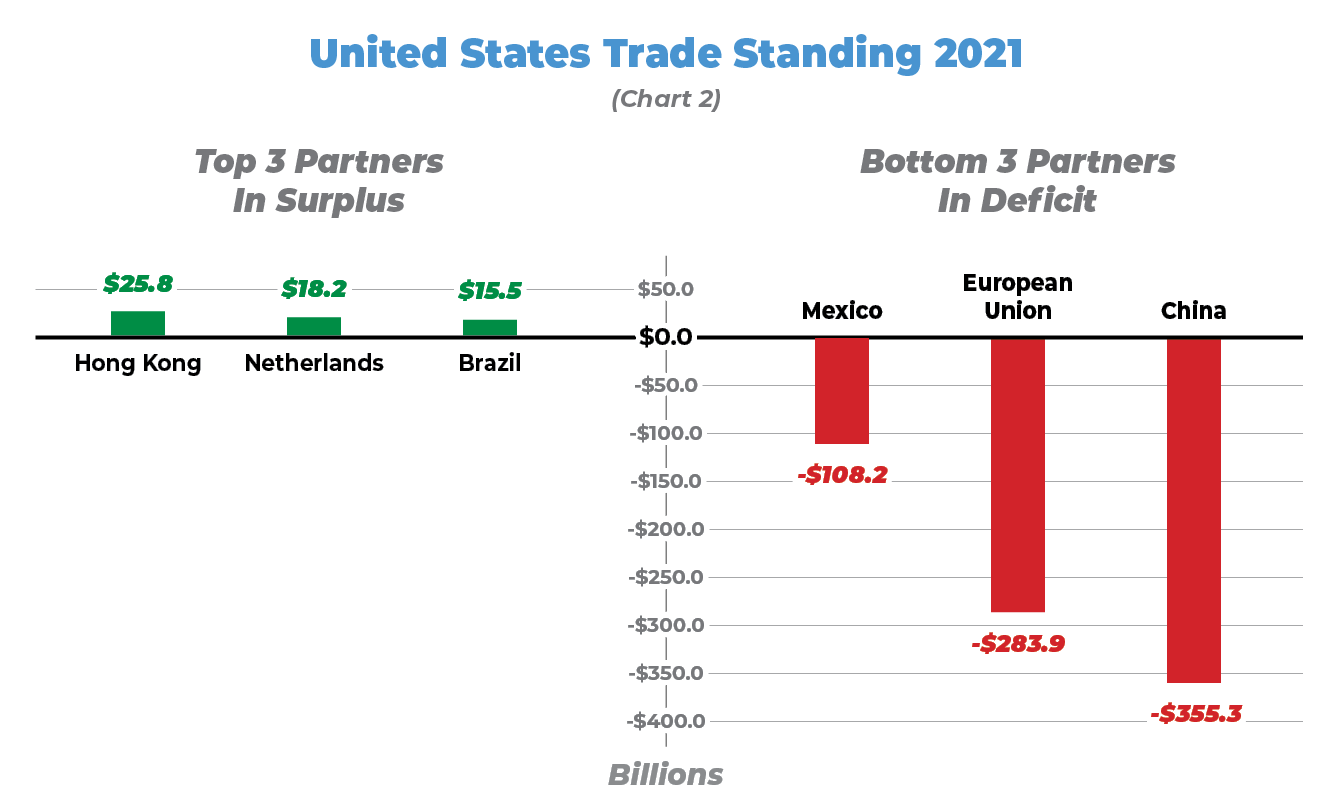 There is an endless amount of data to further illustrate trends in American trade.  Perhaps our leaders should pause for a moment and examine the impact of those trends beyond purely a dollars and cents calculation.  Are there other outcomes that are more difficult to quantify?  Have we become overly reliant on foreign trading partners and if so, what does it mean for the supply chain or even national security?

Ambassador Robert Lighthizer, who served as President Donald Trump’s United States Trade Representative, summarizes the balance our leaders have attempted to strike over the years as they worked toward what is best for America, “Conservative statesman from Alexander Hamilton to Ronald Reagan sometimes supported protectionism and at other times they leaned toward lowering barriers. But they always understood that trade policy was merely a tool for building a strong and independent country with a prosperous middle class.”

If America viewed trade policy as a tool and not a goal in and of itself, we would want to consider how dependent we are on other nations for necessities, including potentially hostile adversaries such as China.  This even includes materials related to our national security and defense. Currently, a shortage of semiconductors exists. “Why are semiconductors so important? Because computer chips are the ‘brains’ of not just computers, cars, and medical devices, but also the weapons systems that support America’s military. Being so dependent on imported computer chips leaves America’s national security vulnerable to the whims of the global market,” wrote Michael Stumo, CEO of the Coalition for a Prosperous America.

“What’s worrying is the degree to which China dominates the global supply of these crucial resources. For example, China controls 70% of the world’s lithium supplies, 80% of rare earth metals, and roughly 70% of the world’s graphite. These materials are irreplaceable for producing everything from electric vehicle batteries to solar panels and semiconductors,” argued Stumo.

As Ambassador Lighthizer alluded to, this is hardly a new dynamic.  Even our Founding Fathers understood the danger of relying on a foreign power for necessities. Before he was the inspiration for an incredibly popular musical, Alexander Hamilton served as General George Washington’s aide-de-camp and led a charge at the siege of Yorktown, which resulted in the British defeat in the Revolutionary War. Hamilton would later become Secretary of the Treasury in President Washington’s administration and he is credited as the “father of American capitalism.” During the Revolutionary War, Hamilton saw firsthand the various hardships the Continental Army endured. One very significant challenge was a lack of supplies and our dependence upon France for resources.

In 1791, Hamilton issued his Report on Manufacturers and a prime point he made was the importance of national self-sufficiency. As Hamilton argued:

Not only the wealth; but the independence and security of a Country, appear to be materially connected with the prosperity of manufactures. Every nation, with a view to those great objects, ought to endeavor to possess within itself all the essentials of national supply.

In his first message to Congress, President Washington offered a similar argument when he stated the nation should “promote such manufactories as tend to render them independent of others for essential, particularly military, supplies.”

Seeking out foreign trading partners has undoubtedly helped consumers by making many goods more affordable.  It has benefited businesses with lower input costs, a lighter regulatory burden in certain countries, and additional markets in which to sell their products.  Living in Iowa, we must acknowledge all the benefits our agriculture producers, for instance, have reaped as they have exported food around the globe.

Nonetheless, as America’s trading strategy is further refined, is there a broader view our policymakers could be taking?  How much should the threats Hamilton and Washington warned about over two centuries ago factor into the next rounds of trade agreements?  This country’s leaders will have plenty to consider beyond the sum total of economic activity.