Conservative Budgeting Continues to Pay Off for Iowa

Governor Kim Reynolds announced that Iowa’s budget will end Fiscal Year 2022 with a $1.91 billion surplus, which follows Fiscal Year 2021’s $1.24 billion surplus. Iowa’s financial position is due to prudent budgeting and fiscally conservative policies. Governor Reynolds and the legislature are demonstrating that their fiscal policies work to create a healthy economy and a strong financial foundation.

Kraig Paulsen, who serves as the Director of both the Departments of Management and Revenue, stated that “Iowa’s strong financial status again proves that we continue to over collect from Iowa taxpayers.” As a result, Governor Reynolds and the legislature have made it a priority to return the money back to taxpayers.

Since 2018, Governor Reynolds and the legislature have focused on improving Iowa’s tax climate. This spring Governor Reynolds signed into law the largest tax relief measure in state history, which was the third set of reform packages passed under her leadership. Under the latest tax reform law, the current nine bracket progressive income tax system will be gradually compressed until it reaches a flat 3.9 percent by 2026. The corporate tax, which currently stands at a top rate of 9.8 percent, will be phased down until it reaches a flat 5.5 percent.

In fact, corporate tax receipts will exceed $850 million in Fiscal Year 2022, which will translate to a 14.2 percent reduction in the top rate. The 9.8 percent rate will be lowered to 8.4 percent next year, which was not anticipated to occur until 2027.

Critics of recent tax reform measures used the tired class warfare arguments of “tax cuts for the rich” and claimed the budget would be a disaster and vital services would suffer. Those critics are wrong. Governor Reynolds and the legislature have not only funded the priorities of government, but they have also reigned in the size of government by delivering pro-growth tax cuts. 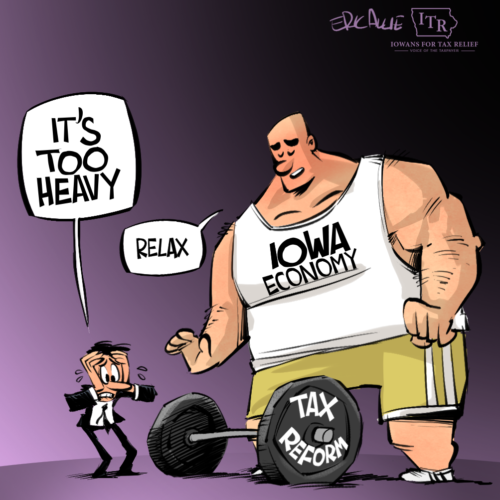 “Time and again over the last five years, we’ve ignored the self-appointed experts who insisted that tax cuts and economic prosperity wouldn’t be worth the cost,” said Gov. Reynolds. Further, Governor Reynolds noted that the “budget numbers show, they were worth every penny. It turns out that growth-oriented policies and fiscal restraint are a powerful combination.”

The cornerstone of any sound tax policy is to keep spending limited. “This generational tax cut will be implemented over the next several years, and a conservative, sustainable budget must accompany that tax relief,” argues Iowa’s Senate Majority Leader Jack Whitver.

Iowa’s economy has become more competitive in recent years, joining several other states that have enacted significant tax reforms. “When looking for the state that made the most significant changes to its tax code this year, that award probably goes to Iowa, the other state where lawmakers enacted tax reform in 2022 that moves in the same direction as North Carolina’s reforms,” argues Patrick Gleason, who serves as Vice President for State Affairs at Americans for Tax Reform.

North Carolina has served as the gold standard for state tax reform. North Carolina has lowered the individual income tax rate and the corporate tax rate in the Tar Heel State is scheduled to be eliminated. The reason for the success of North Carolina is they have balanced limiting spending with prudent tax reform. This is exactly the policy blueprint that Governor Reynolds and the legislature are following. Iowa is now a gold standard example for other states to follow.

This year is being hailed as a “flat tax revolution” because of the number of states that have enacted legislation to transition from a progressive income tax rate structure to a low flat rate. Iowa was joined by Georgia, Arizona, Mississippi, and Idaho in enacting a flat tax in 2022.  The good news for taxpayers across the country is there are still more states considering similar proposals.

"Iowans want common-sense responsible policies even when it requires going against the grain. We cut taxes when many said our budget couldn’t handle it; we kept our economy open when few others were; we chose growth over government even when it was hard. As a result, our fiscal health is strong, and our tax code is more competitive than ever,” stated Gov. Reynolds.

Tax reform is far from finished in Iowa. By continuing to follow fiscal conservatism and prudent budgeting, rates can be lowered even more until the goal of eliminating the income tax is achieved.

Once again Governor Reynolds proves that conservative budgeting pays off. She is a champion for Iowa taxpayers and a defender of traditional values. Fiscal conservatism is working in Iowa, and we can now join with North Carolina as a gold standard example for other states to follow.