Direct notification is an aggressive transparency measure forcing local governments to be honest with taxpayers about how their property tax bills will be affected by potential spending increases.

Iowans are frustrated with high property taxes, but very few understand the complexity of the system. In 2019, the property tax transparency and accountability law required each city and county to hold a public hearing focused on the proposed budget and total property taxes needed to fund that budget. Information about this hearing such as the date, time and location are required to be published and posted on the local government’s website, social media accounts and the local newspaper.

While Iowa law now mandates property tax hearings be held, many taxpayers are not aware of these events. Unfortunately, few taxpayers browse their local governments’ websites looking for information, and notices are often placed in the back pages of newspapers and go unseen. In addition, the detailed budget notices are complicated and hard for the average taxpayer to understand.

Numerous reasons explain this unfortunate fact. Taxpayers can feel intimidated by local officials, and finances can be more complex and less exciting than other issues.  Fireworks and animal ordinances, for instance, frequently attract greater participation from concerned citizens.

Direct notification laws exist in Utah, Kansas, and Nebraska and have significantly increased the number of taxpayers actively participating in budget hearings. The best way to describe direct notification is that it is an aggressive transparency measure, and it forces local governments to be honest.  This policy is the gold standard for property tax reform, injecting more sunlight and transparency into the local government budget process. Rusty Cannon, President of the Utah Taxpayers Association, described the importance of direct notification and the budget hearing thus:

And having that process in place has made elected officials through the decades that this has been in place to think twice or three times about getting a plan together, substantiating that plan, making it clear to voters, “here’s why we need this, here’s what we’re going to do”, and when they make their case, oftentimes taxpayers will show up to these hearings and walk away convinced that this is something that’s needed.

Modeled after existing laws across the country, public hearings on property taxation and spending should require a direct notification be sent to taxpayers within each jurisdiction, personalizing the impact for their property.  The notification would provide information on the proposed budget and how much their specific tax bill would increase under the proposal. The notice needs to include the same information local governments are already required to post such as the date, time, and location of the hearing. Citizens are thus empowered to voice their opposition or support, and the process forces local governments to justify spending increases. Local government officials must also take recorded votes to approve increases in tax collections.

Direct notification is important because it provides the taxpayer with information on how their property tax bills will be affected by potential spending increases in a more personal way.  Rather than trying to determine what a given city or county may be proposing within their new budget, taxpayers can clearly see how much that budget will cost them. Taxpayers who have more information about local budgets feel more comfortable attending hearings and expressing their concerns about rising property taxes. 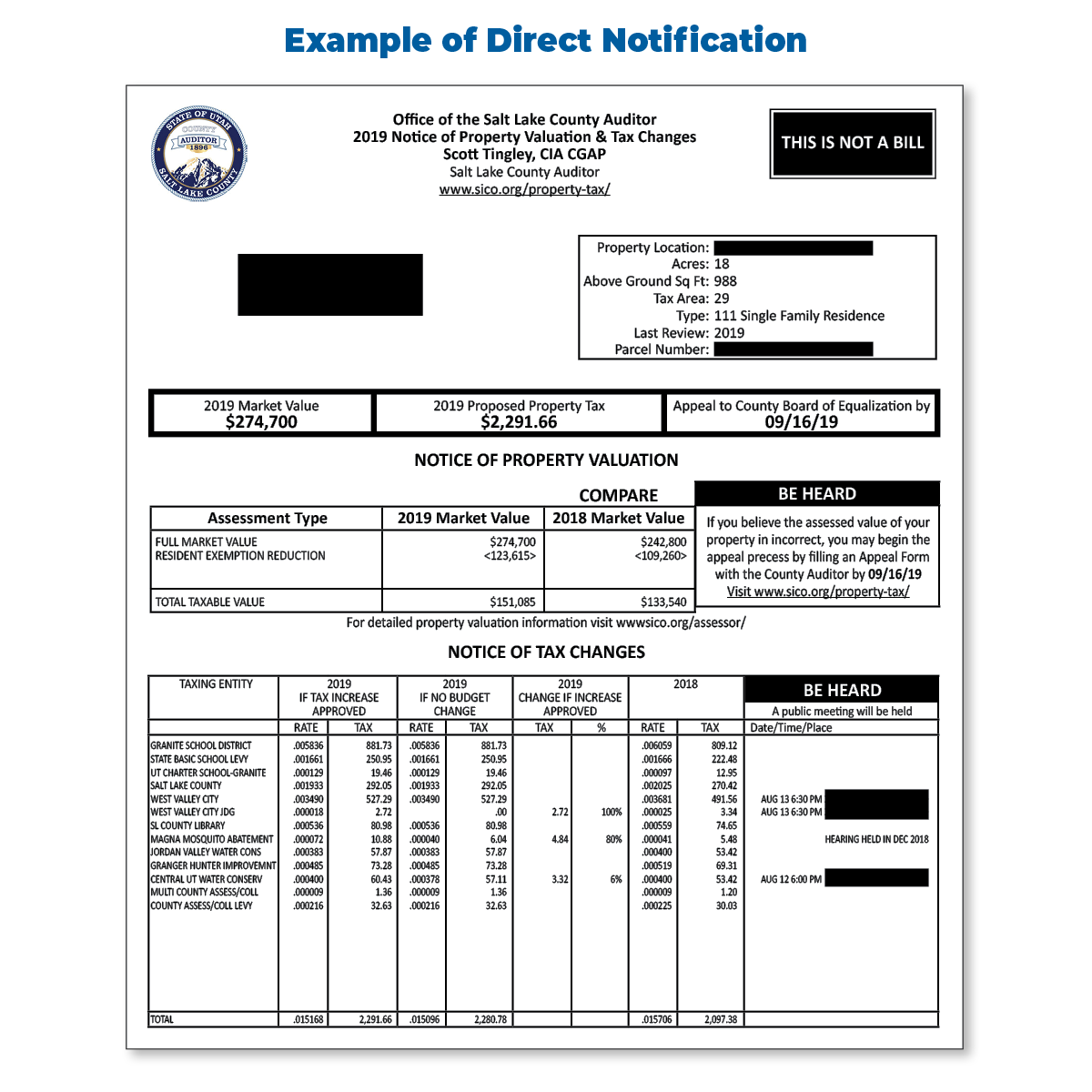