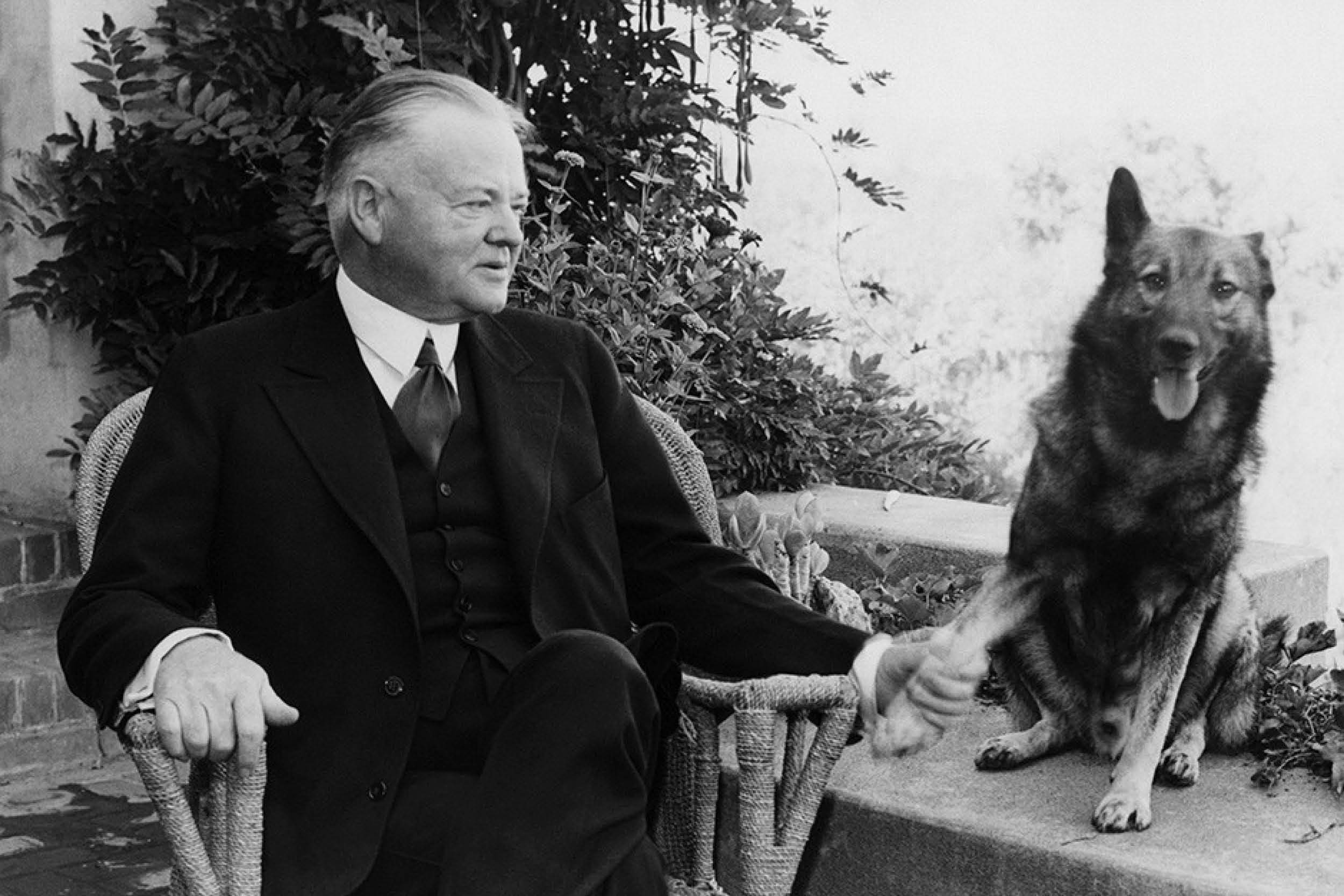 Herbert Hoover, who served as the 31st President of the United Sates, was born in 1874 in the small village of West Branch, Iowa. Growing up he was shaped by his Quaker upbringing. Orphaned at a young age he went to live with an Uncle in Oregon and eventually he enrolled at Stanford where he graduated with a degree in geology. Hoover’s values were shaped by moral virtue, service, and a relentless work ethic. Hoover’s view of the United States as an exceptional nation also shaped his philosophy. Hoover applied his abilities in the field of mining engineering and he soon became known as the “Great Engineer” as his successful mining career took him to several continents and gained him considerable wealth. On the eve of the Great War (World War I), Hoover was working in England and when war began, he soon found himself on the “slippery slope of public life.”  During the war Hoover organized the Commission for the Relief of Belgium, which based upon private initiative, was able to feed a countless number of people who faced mass starvation.

Hoover’s service, which “fed war-torn Europe during and after World War I,” earned him the title of the “Great Humanitarian.”[i] Richard Norton Smith and Timothy Walch, both historians and Hoover scholars, wrote that Hoover “developed a unique philosophy — one balancing responsibility for the welfare of others with an unshakable faith in free enterprise and dynamic individualism.”[ii] Hoover’s role as a public humanitarian continued in both the aftermath of World War I and World War II in his effort to bring relief to war-torn areas. In addition, as Secretary of Commerce under President Calvin Coolidge, Hoover marshaled a private-sector response to bring relief and aid to the devastating Mississippi River flood of 1927.

Herbert Hoover’s involvement in public humanitarian projects and in the great political debates that shaped his public career is remembered more often than his generous activities as a private philanthropist. Hoover, along with his wife Lou Henry, shared a commitment and a moral responsibility to help their fellow citizens. By personality, Hoover was introverted and “he insisted on keeping much of his life and good deeds out of the public eye.”[iii] In fact as President during the Great Depression, Hoover was not only blamed for the worst economic crisis in American history, but he was seen as heartless toward the national suffering — both of which were not true. President Hoover did not allow his charitable activities to be made public or politicized and he and Lou Henry quietly contributed to the relief of many Americans. Even during the Bonus Army crisis, Hoover provided aid to the Great War veterans who were encamped in the nation’s capital in an attempt to lobby the Congress is passing a “bonus” for their service.

The nation “saw nothing of his private anguish, or the dozens of personal bequests he made to individuals in need…,” wrote Richard Norton Smith.[iv] Glen Jeansonne, a historian and biographer of Hoover, wrote that he [Hoover] “never forgot a kindness or ignored a chance to help a friend.”[v] “Hoover did not simply save Belgium, much of Central Europe, and the Soviet Union from famine during the era of the Great War; he performed small acts of kindness virtually every day,” wrote Jeansonne.[vi] Hoover demonstrated grace in his philanthropy and not using it for political self-promotion.

Two significant areas of Hoover’s private philanthropy centered on children and his involvement with Stanford University and the creation of the Hoover Institution on War, Revolution, and Peace. Hoover “had an enduring love for children,” which shaped many of his public and private philanthropic endeavors.[vii] In his post-presidency Hoover became very active and even selected as Chairman of the Boys Club of America — an organization dedicated to helping children develop character and potential.[viii] Richard Norton Smith wrote that Hoover “devoted thousands of hours to the organization, building it up from 140 clubs to more than 600 at the time of his death…”[ix] The Boys Clubs or Hoover’s “pavement boys” was an example of his concern for the wellbeing of children and the need to provide a positive service. Lou Henry Hoover was also involved in the Girl Scouts of America. The Hoover’s saw a moral responsibility in investing and caring for children.

Hoover also believed that ideas have consequences and he witnessed firsthand the harm that ideologies such as socialism, communism, and fascism had on various nations. He also witnessed the tumultuous events of World War I and the aftermath, which had a devastating impact on the world.  Hoover donated $50,000 of his own money to Stanford in the aftermath of World War I to begin collecting documents related to the issues/philosophies that contributed in causing the Great War.[x] Eventually the Hoover Institution collected information and materials on a variety of issues and philosophies, especially the danger of communism which dominated the world scene in the aftermath of World War II. The Hoover Institution also became a leading “think tank,” which provided a defense of the American constitutional system and provided solutions to public policy problems based upon liberty and constitutional government.

The Hoover Institution had a tremendous impact on both foreign and domestic policy during the 20th century. Many leading policymakers such as President Ronald Reagan relied upon the ideas and scholars from the Hoover Institution in shaping foreign and domestic policies. Today the Hoover Institution is not only working to advance and protect the cause of liberty, but it is also a major player in shaping public policy. Hoover not only invested in Stanford University, but he also was a benefactor to the conservative movement at large. He helped numerous causes and organizations such as William F. Buckley’s National Review that were and still are devoted to the protection of constitutional government and the advancement of liberty. Hoover’s belief in the American system of liberty continues to impact the lives of not just American citizens, but people across the globe. The principles of the American Founding provide the best resource in not only fostering liberty, but as Hoover demonstrated, providing also the civic virtue to serve nation and citizenry.

Hoover practiced the philanthropic virtues that he professed. As President, he declined to spend any of his salary on himself. Instead, he gave it away to charities or as income supplements to his associates. During their long marriage, he and his wife extended charitable assistance to countless needy recipients, usually anonymously and through surrogates. In the 1930s, Hoover’s brother concluded that he [Hoover] had given away more than half of his business profits for benevolent purposes. Characteristically, however, Hoover concealed most of his benefactions, with the result that their full extent may never be known.[xi]

Herbert Hoover’s faith and sense of American exceptionalism shaped his entire life. His Quaker faith taught him moral virtue and the principles of America provided him an opportunity to grow from being an orphan to President of the United States and later an elder statesman. In a response to a letter from a 10-year-old boy seeking advice to fulfill his goal to one day become President, Hoover not only encouraged the boy’s goal, but gave him some life principles that would fulfill those goals. Some of those principles included “honesty and sportsmanship and consideration of others in his character — together with religious faith.”[xii] In closing Hoover told the boy that “if you follow these rules, you will be a man of standing in your community even if you do not make The White House.”[xiii] Hoover’s display of these values — both private and public — resulted in a lifelong career of public service to his fellow man, not only in the United States, but across the globe.

[i] Richard Norton Smith and Timothy Walch, “The Ordeal of Herbert Hoover,” Prologue: Quarterly of the National Archives and Records Administration, vol. 36, No. 2, Summer 2004, p. 31.