Yesterday the Iowa legislature passed a historic tax reform measure. Going into the 2022 legislative session Governor Kim Reynolds and the Republican-led legislature made tax reform a priority. The tax relief bill passed by both chambers phases in a 3.9 percent flat rate for individual income tax by 2026, a major reduction from today’s top marginal rate of 8.53 percent. Beginning next year, Iowans will no longer pay taxes on retirement income.  And the reforms will also pare down Iowa’s corporate tax credits while lowering our top corporate tax rate of 9.8 percent to a flat 5.5 percent.

All taxpayers in Iowa will see tax relief in this package of tax cuts; Senate Majority Leader Jack Whitver estimates this will save Iowans an average of $1,326 on their taxes on an annual basis.  This is real money and Iowans are looking forward to an improved tax code.  An  ITR Foundation poll released this week shows 57 percent of Iowans support a new, low flat tax, while only 24 percent of Iowans oppose the  change.

Just how significant are these reforms? A brief examination of Iowa’s income tax history will demonstrate the magnitude of this victory for taxpayers. In 1934, the first income tax (and sales tax, for that matter) was levied in Iowa to provide property tax relief. The rates in 1934 ranged from 1 to 5 percent, spread over five tax brackets. The corporate tax was introduced at 2 percent that same year, and eventually grew to become the highest corporate tax rate in the nation at 12 percent. 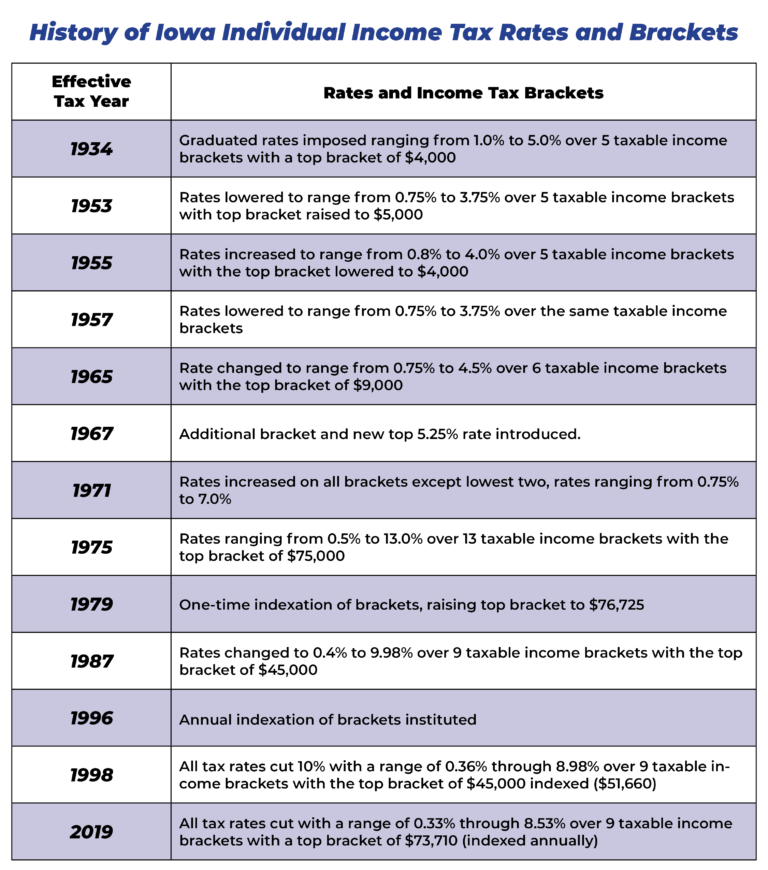 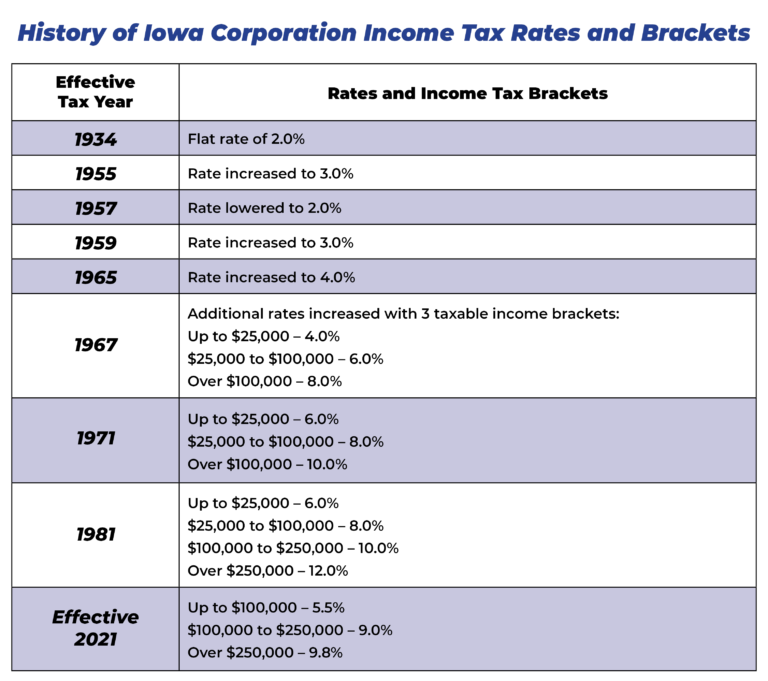 Individual income tax rates continued to increase until they reached a high point of 9.98 percent in 1987. In 1998 a 10 percent across-the-board rate cut brought the top rate down to 8.98 percent with nine tax brackets.

During her first year in office (2018), Governor Reynolds made tax reform a priority and the legislature responded by passing, at the time, the largest tax cut in Iowa history. The individual income tax still had nine brackets, but the top rate was immediately lowered to 8.53 percent, with additional cuts planned, subject to future revenue triggers.  Iowa’s 12 percent corporate income tax rate was reduced to 9.8 percent in 2021 as part of those changes, along with a modernization of Iowa’s sales and use tax.

In 2021, the legislature passed another tax reform measure, which not only phased-out the obsolete inheritance tax, but it also repealed the revenue triggers which had been established in the 2018 law to guide further individual income tax rate reductions. By repealing the triggers in 2021 the top rate would be lowered to 6.5 percent in 2023.

While the reforms passed in 2018 and 2021 were great steps in the right direction, this year’s set of income tax reforms dwarfs them.  Under the new tax reform measure passed by the legislature this week, individual income tax rates will be reduced as follows:

In 2026 the individual reforms will be complete with all Iowans paying a flat, 3.9 percent income  tax.  And of course, the aforementioned exemption on retirement income begins next year.

The path to corporate rate reduction is slightly different.   In addition to reducing the amount of tax credits that can be refunded to a corporate taxpayer, the top rate corporations pay will be reduced as corporate tax revenues grow.  This ratcheting down will be complete once a flat rate of 5.5 percent is reached.

A critical part of Iowa’s successful tax reform story is often forgotten. The reason why Governor Reynolds and the Republican legislature have been able to enact meaningful pro-growth tax reform since 2018 is because they have adhered to prudent budgeting. By practicing fiscal conservatism and keeping spending growth restrained, tax reform was made possible. “So how did we get there? We stuck to conservative budgeting practices,” Governor Reynolds said in addressing a room full of Iowans for Tax Relief and NFIB members just this week. “There is nothing more vital than seizing the opportunity to return taxpayer dollars back to Iowans.”

It's no surprise that Governor Reynolds was chosen to give the GOP response to President Biden’s State of the Union speech next week.  In addition to being an example of how conservative leadership works, Iowa is becoming a national leader on state tax policy. Our state’s progress is a story worth sharing.