Is Iowa Prepared for the Federal Debt Crisis?

Uncle Sam is broke and the nation is on the verge of a serious debt crisis, if we are not already in one.  The United States Government Accountability Office (GAO) recently released an alarming report regarding the nation’s fiscal health and their conclusions aren’t good.  The report, which should be taken very seriously, flatly states, “The federal government faces an unsustainable fiscal future.”  Consider the magnitude of Congress’s own watchdog cautioning the nation that we cannot continue down the same spending path we are on.

The root cause of this warning is our national debt, which has grown because of out-of-control spending that has occurred under both Republican and Democrat administrations. The GAO report maps out the precarious path the federal government is on: 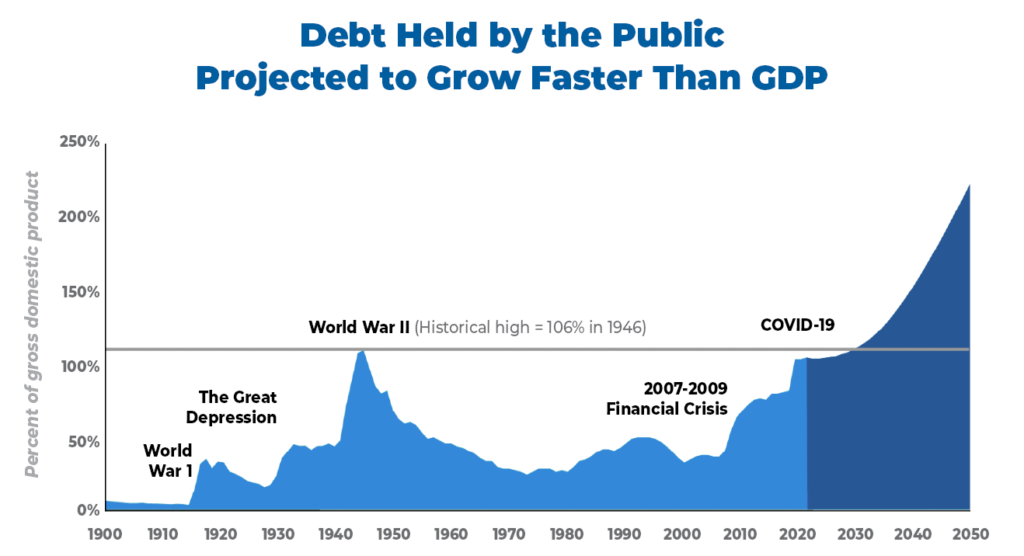 The GAO isn’t alone among government offices and agencies in sounding this alarm.  As cited in the report, projections from the Office of Management and Budget, Department of the Treasury, and the Congressional Budget Office all show that current fiscal policy is unsustainable over the long term.

The national debt currently stands at $30 trillion and rising as the federal government continues to run massive deficits; federal spending does not appear to be slowing anytime soon. If President Joe Biden’s budget priorities are passed by Congress it is estimated that the national debt will grow to $44.8 trillion by 2032. “Government spending has increased 266 percent over the past 20 years compared to GDP growth of only 112 percent over that same period,” wrote Preston Brashers, a Senior Policy Analyst at The Heritage Foundation.

Maybe none of this is a surprise.  After all, Washington, D.C. is rarely held up as a model of fiscal restraint.  But even a state that is run as soundly as Iowa needs to be concerned.  Iowa, just as with other states, is dependent upon the federal government for support. Our state’s general fund, which relies most heavily on income taxes and sales taxes, is just over $8 billion.  However, it is estimated that the federal government will be sending more than $9 billion to the Hawkeye State this year to supplement funding for Medicaid, education, and a host of other programs, as outlined in the table below. 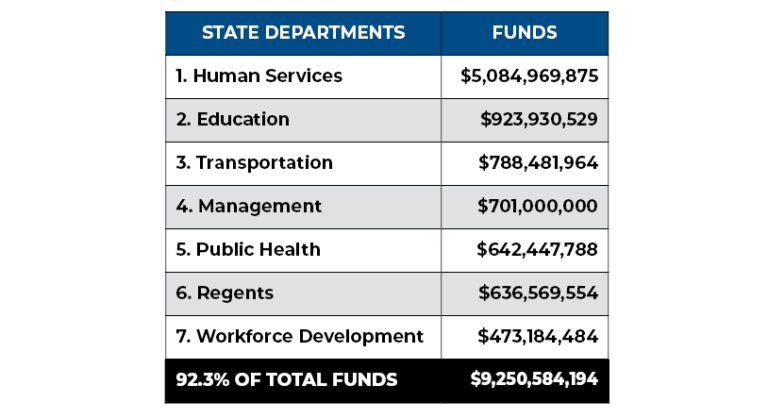 By the way, that $9 billion in federal support does not include the billions that Iowa received through the many COVID-19 related economic stimulus measures passed by Congress. Our state has received a similar amount ($9.2 billion) from the CARES Act and American Rescue Plan Act (ARPA), among other stimulus measures. The most recent stimulus legislation, the Infrastructure Investment and Jobs Act, will provide Iowa with an estimated $1 billion per year from Fiscal Year 2022 through Fiscal Year 2026.

Iowa policymakers need to prepare for a serious economic crisis that could be triggered because of the federal government’s massive debt.  Remember, a handful of government offices have already declared Washington’s fiscal policy as unsustainable. What would happen if those federal dollars flowing into Iowa were reduced?

On the current path it seems inevitable that our federal government won’t live up to its obligations to the states.  So, what then?  If Congress cuts back the dollars they send us, will they still maintain the current strings that are attached to those dollars?  Or would they be willing to cut those strings and allow state policymakers to innovate?  Iowa lawmakers need to find ways to push back against Washington, D.C., while looking for ways to innovate.  Are there any potential savings the federal government currently won’t allow them to seize?  State-level leaders need to set priorities to determine what programs are essential and what programs are merely an extension of federal largesse.

In recent years Iowa has done the direct opposite of the federal government. Governor Kim Reynolds and the legislature are following a policy of fiscal conservatism and laying a stable financial foundation.  Nevertheless, Iowa needs to be prepared for the approaching debt crisis because a time is coming when true austerity may force Uncle Sam to cut spending, which will directly impact the fiscal structure of the states.