Spending limits are similar to speed limits in a school zone, both are designed to protect. In the case of local governments, they apply the brakes to slow spending down.

One solution for property tax relief is strengthening the 2 percent “soft cap” placed on city and county budgets through the 2019 property tax reform law.

A stronger spending limitation on all local governments, including school districts, would require voters to approve a budget increase and avoid interfering with the market’s ability to determine property valuations. It would also avoid the pitfall of exempting various budget categories.

If a spending limitation is designed to exempt numerous budget items, it is less effective. New Jersey, for example, established a 2 percent property tax cap but exemptions for pensions, health benefits, debt, construction, and emergencies weakened the reform. Kansas followed a similar path, after which lawmakers found it necessary to pass a “truth-in-taxation” law as a remedy.

Iowa’s recent repeal of the mental health property tax levy demonstrates why a spending limit on total budgets is needed. Many counties in Iowa (49 out of 99) failed to pass along savings to taxpayers, increasing spending instead.

A stronger cap would not be unusual; examples of property tax rate and levy limitations abound.

New York, a progressive, high-tax state, is not known for pro-taxpayer policies. Even so, the Empire State made permanent a property tax revenue cap limiting the annual growth of taxes levied by local governments and school districts to the lesser of 2 percent or the rate of inflation. For a local government to exceed the cap, the governing authority must approve it by a supermajority vote. The property tax cap has not hindered local governments or public education but has successfully saved taxpayers billions.

In 2019, the Texas legislature passed a property tax reform law (Senate Bill 2) that requires local governments to “hold an election if they wish to raise 3.5 percent more property tax revenue than the previous year.” Cities and counties must go to the people for a vote before they can increase revenue beyond that limit, adjusted for any new local growth. “To put it bluntly, Senate Bill 2 requires cities and counties to stay within their taxpayers’ ability to afford their local government,” wrote Texas Lieutenant Governor Dan Patrick. The measure also limited the growth of school district revenue to 2.5 percent.

Colorado has the country’s most-strict tax and spending limitation written into its state constitution. Colorado’s Taxpayer’s Bill of Rights (TABOR) not only limits government spending, but also requires voter approval of tax increases and bond measures. The main pillars of the TABOR include:

Local government revenue under TABOR “is tied to inflation plus construction value, and school districts are limited by student enrollment.” TABOR mandates that revenue beyond the limit is returned to taxpayers. Consequently, and because of other property tax limits, including assessment, rate, and levy limits, the property tax is the “most limited of all taxes in Colorado.”

Iowa State Senator Brad Zaun (SF 2104) has introduced a property tax reform bill with a strict spending limitation. In part, the bill would reform the 2019 law to lower the 2 percent budget increase to 1 percent and require budget increases to be approved by voters during elections, in which they would have to win 60 percent of the vote.

Requiring local governments to earn a vote of the people to raise spending forces them to be more accountable and to justify new spending.

James Hohman, Director of Fiscal Policy at the Mackinac Center for Public Policy, argues that limitations “ensure popular control of local government.” Tax and spending limitations serve as essential taxpayer protections. “Limits also give residents an important responsibility: to ensure that their government functions appropriately within them,” notes Hohman.

Economist Daniel Mitchell describes spending limits as similar to speed limits in a school zone, both are designed to protect. In the case of local governments, they apply the brakes to slow spending down. 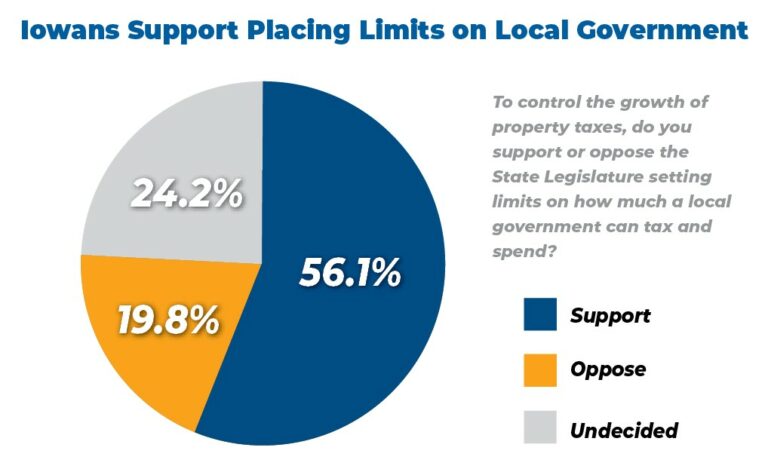