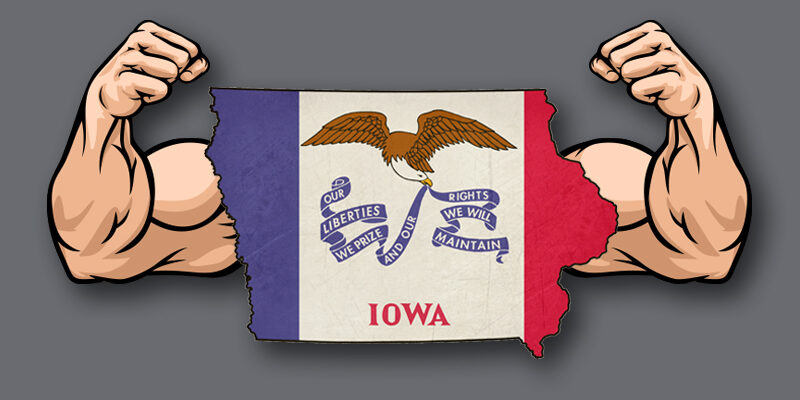 However, the annual report, Rich States, Poor States, describes how states across America continue to advance policies that help their taxpayers increase take-home wages and enhance their standard of living. This year, Indiana will once again lower its corporate income tax rate from 5.25 percent to 4.9 percent. Since 2012, Indiana has been gradually lowering the corporate tax rate from a starting point of 8.5 percent. Corporate tax rates vary greatly across the 50 states that tax business income, from the highest tax rate in Iowa of 12 percent to the lowest in North Carolina of 2.5 percent.

Thanks to Iowa’s 2018 tax reform law, in 2021, the corporate tax rate will fall to 9.8 percent which will match, Minnesota’s rate. Iowa’s corporate rate will have four brackets, ranging from 9.8 percent to 5.5 percent. However, even at 9.8 percent, Iowa’s rate will still be one of the highest in the nation. South Dakota, Iowa’s neighbor, foregoes taxing individual or corporate income which makes it far more economically competitive. The 2020 National Movers Study ranked (4th) South Dakota in the top five states for inbound residents, while Iowa received a much lower rank at 23rd.

Governor Kristi Noem stated in her State of the State address, “We don’t have a corporate income tax. There is no business inventory tax. We have no personal income tax. We also do not have a personal property tax or an inheritance tax.” Further, Governor Noem said that in South Dakota “we roll out the red carpet and cut up the red tape.” The key to South Dakota’s economic competitiveness is some good old fashioned midwestern frugality.

For Iowa to remain economically competitive the discussion around free market tax reform will be imperative. However, lowering the corporate tax is often viewed negatively by some political pundits, as it is assumed to only benefit large corporations. This is hardly the case. More accurately, the real costs of business taxes are passed onto consumers, workers and those with investments – like teachers who depend on their pension income.

Taxes on income, which includes both individual and corporate income taxes, are considered the most harmful of taxes, due to their negative impact on economic health. High corporate taxes in Iowa discourage productivity, hiring, and investing in Iowa. Evidence is clear that both individuals and businesses negatively respond to high tax rates. Just in recent weeks, businesses such as Oracle and HP Enterprises have fled California’s excessive tax rates and relocated to Texas.

Iowa’s corporate tax rate matters because every state is in direct competition with 49 others for businesses, jobs, and individuals. Iowa would be wise to continue to build upon the 2018 tax reform by working towards a corporate income tax rate that is more competitive for the region.

While beneficial for all hardworking taxpayers, reducing tax rates can be difficult because taxes and spending are on different sides of the same fiscal coin. Therefore, policymakers must prioritize spending. Critics of tax reform often bring up the Kansas tax reforms from a decade ago as an example that cutting tax rates leads to deficits.  What these detractors often forget – or neglect to mention – is the significant uptick in state spending was a major driver of budget problems in Kansas.

Iowa can build on the 2018 tax reform by following Indiana’s successful example. Iowa could begin by reducing both the individual and corporate tax rates. Policymakers could design specific revenue triggers, in turn allowing the rate to be reduced once a revenue target is met. States such as North Carolina have successfully utilized revenue triggers to lower tax rates, while at the same time protecting against the often-overblown concern that tax cuts would be too risky.

There is clearly more work to be done to address business and individual tax burdens, but Iowa policymakers can look to Indiana and North Carolina which have both successfully demonstrated the real benefits of tax reform that enhances economic competitiveness. Reducing tax burdens on employers who are struggling to regain strength after the COVID-19 pandemic, will be key. Moreover, it will enhance the state’s economic development and provide a better standard of living for all Iowans.