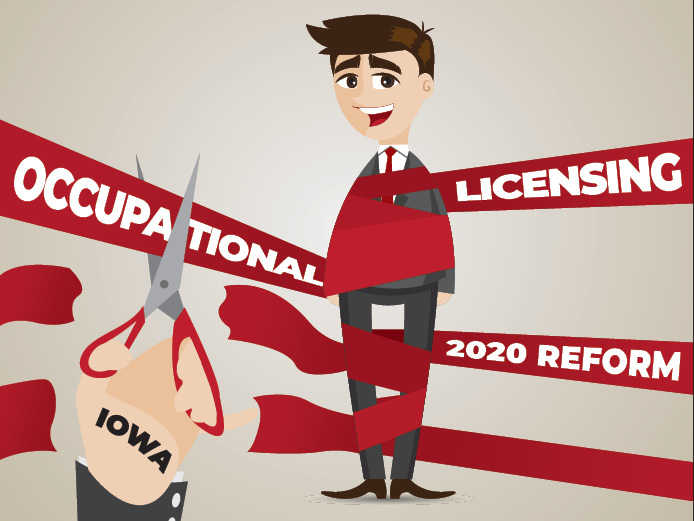 Iowa policymakers and businesses agree, our state needs skilled workers. Iowa is in constant competition with other states for those workers. By reducing onerous occupational licensing regulations, it will not only expand economic opportunities for those here, but also attract new workers into our state. It will also provide opportunities to enter the workforce for those who might currently be ineligible because of past criminal convictions.

A fundamental provision of the occupational licensing reform law is universal recognition of out-of-state licenses. Individuals who now relocate to Iowa and are in good standing in terms of their licensure will now be recognized without going through the licensing process again. Arizona became the first state to pass universal recognition for licensing and numerous individuals have benefited as they relocated into the state.

Universal recognition is a commonsense reform, which was recently demonstrated with the coronavirus (COVID-19) emergency. During the COVID-19 pandemic, one of the regulations lifted by Governor Reynolds allowed those in the medical profession, who were in good standing with their license, to be able to practice in Iowa and provide critical medical care. This should be universal for other professional and skilled license holders who are in good standing. It only makes sense as Iowa is attempting to attract more skilled workers.

Lower income Iowans will be empowered by this law. With Iowa being one of the most regulated states for occupational licensing requirements, the financial burden often falls heavily on lower income individuals. Now, Iowans whose household income is at or below 200 percent of the federal poverty level, the initial license application and background check fees will be waived.

Governor Reynolds argues that the significance of occupational licensing reform will “ensure every Iowan, regardless of their background or circumstance, has an opportunity to find success.” This is the objective of occupational licensing reform. Critics of this law will argue that it may harm public safety by creating a “free-for-all,” but this is far from the truth. Iowa’s licensing structure and boards remain, but it removes the regulatory roadblocks that impede work and the ability to earn a living.

The goal of legislation should always be to advance rather than restrict freedom and Iowa’s occupational licensing reform law advances both freedom and opportunity. The right to earn a living is paramount and this law will benefit all Iowans.  This reform tells the nation that Iowa is “open for business.”