On January 11, 2021, the Iowa legislature is scheduled to reconvene. Besides crafting a budget, the legislature will also be confronted with the challenge of creating policies to help stimulate the economic recovery from COVID-19. Governor Kim Reynolds and the Republicans in the legislature have been following a policy of fiscal conservatism by keeping spending low and reducing tax rates. These policies are not only helping make Iowa more competitive, but they prepared the state for the economic emergency triggered by the pandemic. As the legislature prepares to gavel into session, it is critical that they continue to follow a path of fiscal conservatism by controlling spending, lowering tax rates, and reducing the regulatory burden on Iowa’s economy.

Economic liberty is the cornerstone of both the prosperity of Iowa and its citizens. The COVID-19 pandemic is demonstrating that states which have pursued policies of high taxes and spending are not only unprepared for an economic crisis but are also less competitive. States with high tax rates are seeing an exodus of people leaving for states with lower tax rates.

The Wall Street Journal recently reported that Austin, Texas is gaining new residents as people leave California. Billionaire, Elon Musk, recently announced he is leaving the “sunshine state” and is Texas bound, and for good reason. Texas is a no income tax state and is benefiting from its competitive economic climate. “Once again, this shows that public policy matters and that states that take the approach of high taxes and cronyism and big government, like California, are seeing the outmigration effect and seeing the consequences for those decisions,” stated Jonathan Williams, Chief Economist for the American Legislative Exchange Council (ALEC). Williams notes that states such as Texas “who are embracing economic freedom” are becoming a “haven for jobs and economic growth.” 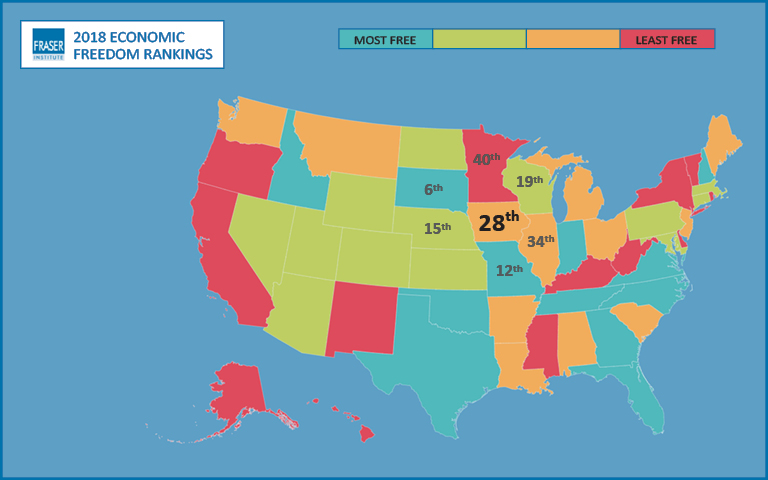 Iowa is ranked 28 out of 50 in terms of economic freedom, while all of our neighbors with the exception of Illinois (34) and Minnesota (40) rank higher. South Dakota, a no income tax state, received the sixth highest ranking for economic freedom. The Economic Freedom of North America report demonstrates Iowa needs to embrace more free-market policies in order to become more competitive.

Advancing free-market policies will begin with adhering to conservative revenue estimates and keeping spending levels low. The priority of the legislature will be crafting a budget within the continuing uncertainty of the pandemic. At the end of Fiscal Year 2020, Iowa’s budget has a $305.5 million surplus and reserves are full. Legislators will need to continue to limit spending and focus on funding the priorities of government.

Iowa’s high individual income tax is also a concern. In 2023, the top income tax rate is scheduled to be lowered to 6.5 percent, but only if two strict revenue triggers are met. The use of triggers in tax policy is not necessarily bad policy, but they should not be so restrictive that it would cause the tax rate reduction to be delayed. Eliminating or even revising the triggers would ensure that income tax rates can be lowered in 2023, which would create more certainty.

Iowa’s regulatory environment is also crucial to advancing economic liberty. During the last legislative session, the legislature passed an occupational licensing reform law that grants universal recognition for licenses. This was an important reform which has provided more opportunities for workers who relocate to Iowa. Iowa can build upon this reform by requiring a review of licensing requirements to ensure that regulations are not restricting the workforce. Reviewing proposed and existing licensing regulations will help prevent and eliminate restrictions that hinder the ability of individuals to earn a living.

A broader approach to regulatory reform should also be considered. Iowa should strengthen its regulatory review process by following an approach taken by other states which would require not only a stricter review process, but for every new regulation, one or two old regulations would be eliminated. Regulations, just as with high tax rates, are harmful to economic growth.

“Taxation and regulation constitute the confiscation of some or all of the freedom to own and use property,” stated the late economist Walter E. Williams. Therefore, it is so important for policymakers in Iowa to create an economic climate allowing individuals to flourish. For every dollar that is taken by government in taxes; it is one less dollar that an individual or business has to spend, save, invest, or donate.

The pandemic has shed further light on how states cannot tax and spend their way to prosperity. During the 2021 legislative session policymakers have an opportunity to advance economic freedom by following fiscal conservatism. By keeping spending levels low, reducing tax rates, and eliminating burdensome regulations, it will create more economic freedom, opportunity, and make Iowa more competitive.