This year, Indiana will once again lower its corporate income tax rate from 5.5 percent to 5.25 percent. Since 2012, Indiana has been gradually lowering the corporate tax rate from 8.5 percent, and the rate will continue to be lowered until it reaches 4.9 percent in 2022. Corporate tax rates vary greatly across the United States, from the highest tax rate in Iowa of 12 percent to the lowest in North Carolina of 2.5 percent. 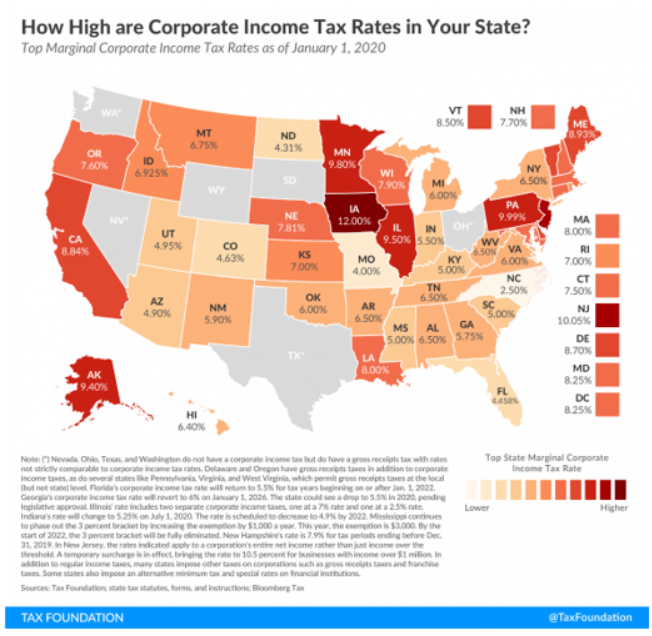 Thanks to Iowa’s 2018 tax reform law, in 2021, the corporate tax rate will fall to 9.8 percent which will tie us with our northern neighbor, Minnesota. Even with this lower tax rate, Iowa’s rate will still be high.

Many states have or are in the process of gradually lowering their corporate income tax rates. For Iowa to remain economically competitive it must follow suit. However, often lowering the corporate tax is viewed negatively as it is assumed to only benefit large corporations. This is hardly the case and a consequence of high corporate tax rates is the cost is passed onto consumers.

Taxes on income, which includes both individual and corporate income taxes, are considered the most harmful of taxes. Economists from Ohio’s Buckeye Institute argue, corporate taxes are economically damaging because they “discourage business productivity by reducing the benefits of hiring workers or investing in infrastructure.” In addition, corporate income taxes “syphon resources away from productive investments and increase the cost of doing business.” Both business and labor are essential for economic growth and a high corporate tax rate discourages both.

Iowa’s corporate tax rate matters because we are in direct competition with 49 other states for businesses, jobs, and people. South Dakota Governor Kristi Noem recently declared that her state is “open for business” and she champions the state’s low tax and regulatory climate as an economic incentive for businesses to locate. South Dakota does not levy a corporate or individual income tax. The Tax Foundation ranked South Dakota as the second best for their state business tax climate, while Iowa is ranked as one of the worst at 42nd.

Iowa must continue to build upon the 2018 tax reform law by furthering lowering the corporate income tax rate. Reducing tax rates is never easy because spending is involved. Taxes and spending are on different sides of the same coin.  Following Indiana’s example, Iowa could begin gradually lowering the corporate tax rate. Policymakers could design specific revenue triggers, in turn allowing the rate to be reduced once a revenue target is met. States such as North Carolina have successfully utilized revenue triggers to lower tax rates, while at the same time protecting the budget.

Iowa should look to Indiana and other states who have successfully demonstrated that tax rates can be lowered. In order to grow the economy and make Iowa more competitive it is imperative corporate tax rates be lowered.