In 2018, Governor Kim Reynolds and the Iowa legislature passed a comprehensive tax reform measure that lowers both the individual and corporate income tax rates as well as broadens the sales tax base.

Although the 2018 reform was historic, Iowa will still have high income tax rates. Iowa’s top individual income tax rate will be 6.5 percent and the top corporate rate will be 9.8 percent. Governor Reynolds and Republican legislative leaders have stated that tax reform is not finished. 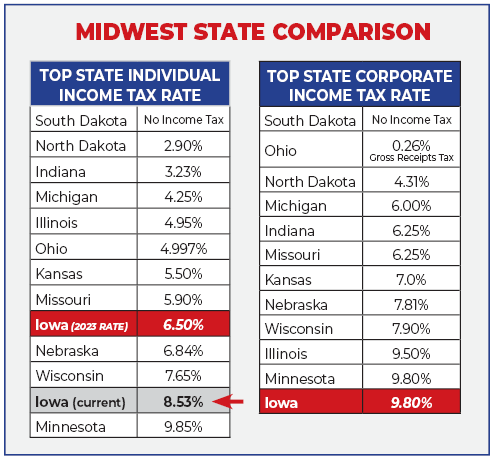 During the 2020 legislative session, Governor Reynolds proposed the Invest in Iowa Act, which called for a 10 percent income tax reduction in 2021 and further reductions which would lower the top rate to 5.5 percent by 2023. The Invest in Iowa Act was not just an income tax reduction measure, but a comprehensive proposal which called for a one-cent sales tax increase to help pay for income and property tax relief.

However, the economic recession triggered by COVID-19 tabled the Invest in Iowa Act along with any other potential tax reform proposals. As Iowa’s economy begins to recover from the pandemic, Governor Reynolds has hinted that tax reform is still a possibility for the 2021 legislative session. Republican legislative leaders are also signaling that further tax rate reductions are still a policy priority. Republican Senate Majority Leader Jack Whitver stated that Republicans in the Senate have the goal of “aggressive” tax reductions. Iowa Senate President Jake Chapman, stated that “now more than ever is when we need to be implementing tax cuts.”

Tax rates matter for both individuals and businesses. For every dollar taken in taxes from an individual or business, it is one less dollar they can save, spend, invest, or donate. Tax rates also impact the economic climate of a state. Iowa is in competition with 49 other states for both jobs and people. A major challenge confronting Iowa is attracting new residents and filling the need for a more skilled workforce. In addition, the best economic development strategy is to have a competitive economy based upon low tax rates.

“This is the time to really focus on how we can begin to implement tax cuts that will lead to the total elimination of income tax. My hope is that we do focus on how we can reduce taxes and eventually eliminate the income tax,” stated Senator Chapman. Eliminating Iowa’s individual and corporate income taxes is a noble policy goal, but it will not be easy. Iowa relies heavily on income tax for revenue. The income tax generates an estimated 52 percent of state revenue.

Iowa can approach eliminating the income tax through several various methods. Some of these include phasing-out income tax rates, utilizing revenue triggers, and broadening the sales tax base. TEF Iowa is building upon our sales tax research and is once again partnering with the ERC to consider the potential of broadening the sales tax base with the goal of eliminating the individual and corporate income tax. ERC’s modeling is a compliment to Sales Tax: Broadening Sales Tax Base Can Reduce Overall Tax Burden.

The sales tax is considered less harmful than income taxes and is less volatile during economic downturns. Thanks to encompassing the online sales tax through base broadening, Iowa’s sales tax is helping to keep revenues stable during the COVID-19 economic uncertainty.

Currently, Iowa has an average sales tax rate of 6 percent. With state and local sales tax rates combined, the rate is 6.94 percent. 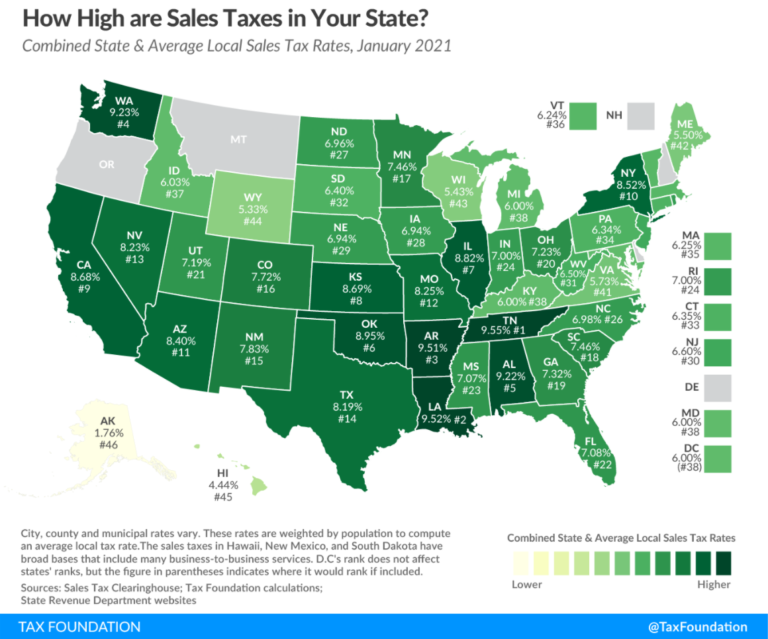 However, numerous sales tax exemptions still exist in Iowa. These tax exemptions result in higher rates. Tax policy should work toward the goal of lower rates and a broader base. Eliminating exemptions and broadening the sales tax base could generate enough revenue to eliminate the individual and corporate income tax rates.

The ERC has modeled three sales tax base broadening scenarios. While most exemptions are eliminated in these scenarios, certain exemptions remain such as business inputs (business to business transactions), agricultural, and food exemptions.

The ERC models provide a potential road map to eliminating the income tax based upon broadening the sales tax base. Pro-growth tax reform must be done with prudence and take into consideration the state budget as well as the priorities of government. Nevertheless, it is imperative for Iowa to lower both individual and corporate income tax rates. Iowa can become an economic leader in the Midwest by pursuing further pro-growth tax reform. Whether this is eliminating the income tax or following the examples of states such as Indiana, North Carolina, and Utah who have lowered their income tax rates, we must find ways to be more economically competitive.

The ERC has completed new economic modeling of Iowa tax reform. They used the same methodology as our 2019 report, A Better Way Forward for Iowa Tax Reform, but updated the analysis with recent data that accounts for the pandemic recession and three new tax reform scenarios. The COVID-19 pandemic disrupted economic activity across the country. Updated estimates from the Congressional Budget Office’s 10-Year Economic Projections were used to adjust the forecasted baseline in each scenario to reflect the post-pandemic economic outlook for Iowa. For the dynamic results, the ERC adjusted for inflation to hold everything constant to 2012 dollars.

The first two scenarios in this study reduce personal and/or corporate income taxes and offset lost revenue by broadening the sales tax base and increasing the sales tax rate. The third scenario addresses eliminating Iowa’s school income surtax. School districts, upon voter approval, can levy a surtax to provide additional revenue. The surtax is not to exceed 20 percent of state income tax liability. As demonstrated by Table 9, a majority of school districts levy a surtax on income.

Currently, Iowa exempts many goods and services from the sales tax, which reduces the size of the sales tax base. We have identified a list of sales tax-exempted goods and services and their lost revenue value from a 2015 Iowa Department of Revenue report that would generate $1.005 billion in static revenue in 2014. This is equivalent to $1.071 billion in 2018. Under a more aggressive scenario, Iowa could raise $2.907 billion (based on 2014 dollars) in static revenue, which adjusted for 2018 would amount to $3.096 billion. We exclude the majority of exemptions for business inputs, agriculture, and food, and then list the exemptions in Table 8.

Table 2 presents the dynamic effects of Scenario 1 and reveals that these policy changes will lead to $1.11 billion in state gross domestic product (GDP) growth in the first year. With increased economic activity, the state will gain back about $610 million in revenue in the first year, even though the static net revenue estimate of the combined proposals would be $0. The sales tax increase is a direct tax on the willingness of Iowans to consume and reduces consumption by $20 million in the first year. Because Scenario 1 increases and decreases taxes that directly affect families, there is no substantial change in work activity. 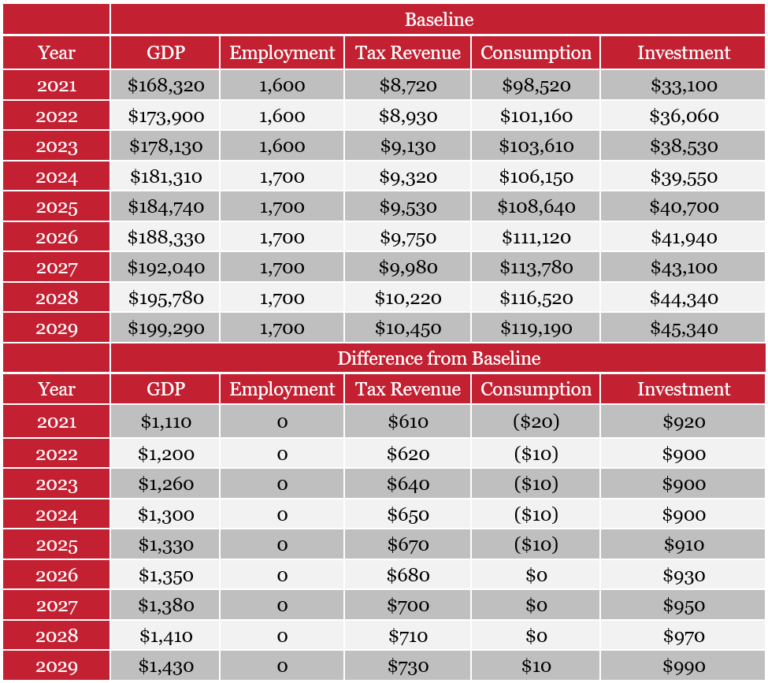 As opposed to the first scenario, which only eliminated the personal income tax, Scenario 2 models the effects of a pro-growth tax reform by eliminating the personal and corporate income tax, which is offset by a static increase in the sales tax. The static model results presented in Table 3 show that eliminating the personal and corporate income tax would reduce revenue by $4.4 billion. That lost revenue can be offset by raising the rate on Iowa’s less distortionary sales tax and by taxing goods and services that are currently exempt from that tax. In either the aggressive or conservative approach to sales tax exemptions the tax on consumption is the same, thus the following results are equivalent between both options.

This aggressive pro-growth strategy, which eliminates the personal and corporate income tax, would require Iowa to rely more on the sales tax to raise revenue. The conservative approach to exemption elimination would require an increase in the sales tax rate from 6 percent to 12.8 percent. Adopting the more aggressive approach would require raising the sales tax rate to 8.7 percent. Table 4 presents the dynamic results of The Buckeye Institute’s dynamic scoring model. Under this scenario, the first year of reform would raise $620 million in revenue. As compared to just eliminating the personal income tax, eliminating the corporate tax would lead to substantially more GDP and investment in the first year. In the first year, this tax proposal would generate $1.34 billion dollars more in investment and $1.67 billion more in GDP. 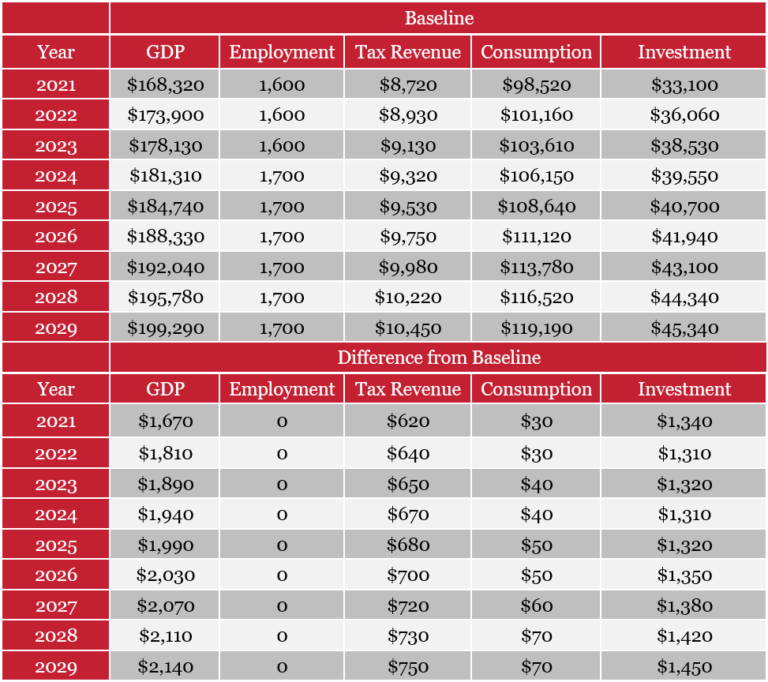 According to the Iowa Department of Revenue, 279 of Iowa’s 330 school districts imposed a personal income surtax on residents to pay for local schools, raising $116.2 million (2018 dollars) in state-collected revenue in 2018. Since the rate varies significantly across districts, in Scenario 3 we model the economic effects of eliminating the school surtax as a proportional decrease in the state personal income tax rate for all Iowans, as shown in Table 5. Eliminating the school surtax would reduce revenue by $116.2 million statically as shown in Table 6. The dynamic results of the Economic Research Center’s dynamic scoring model are shown in Table 7. We find that eliminating the school surtax would increase economic output in the first year by $100 million while also increasing consumption and investment by $40 million to $50 million. Eliminating the school surtax would also lead to a decline in revenue by $100 million in the first year according to Economic Research Center’s dynamic scoring model. Driven by increased economic output, Iowa would lose less tax revenue under the dynamic model than the static model predicts. 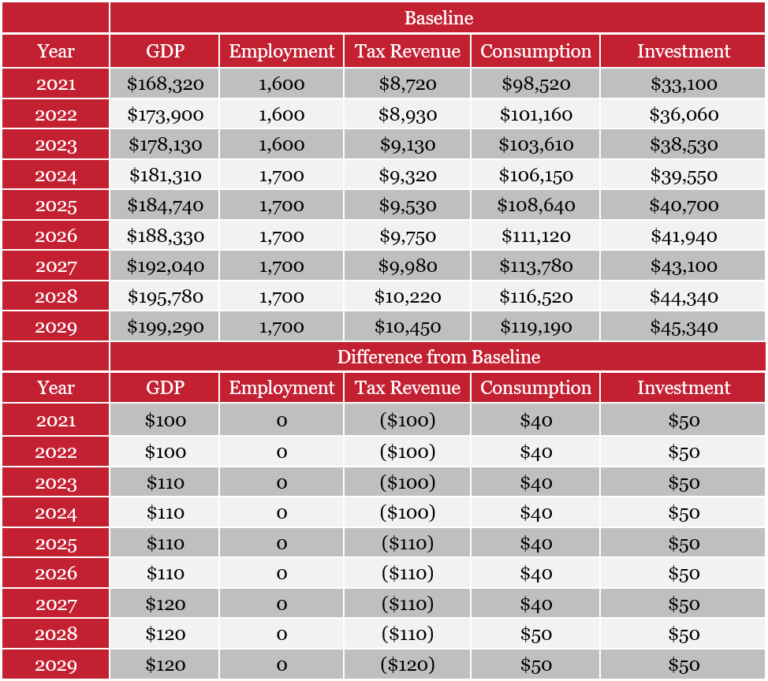 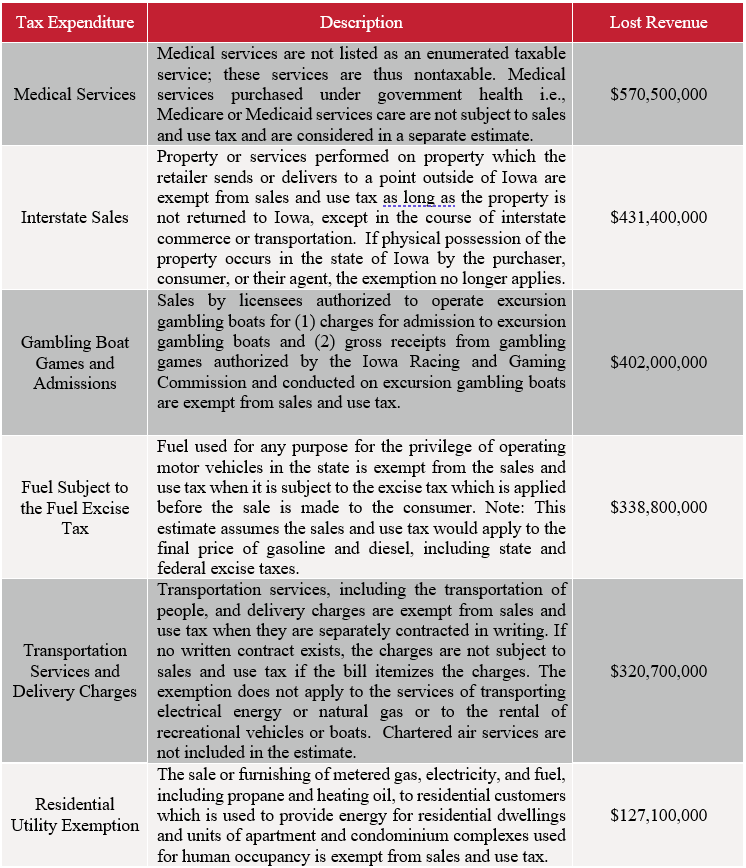 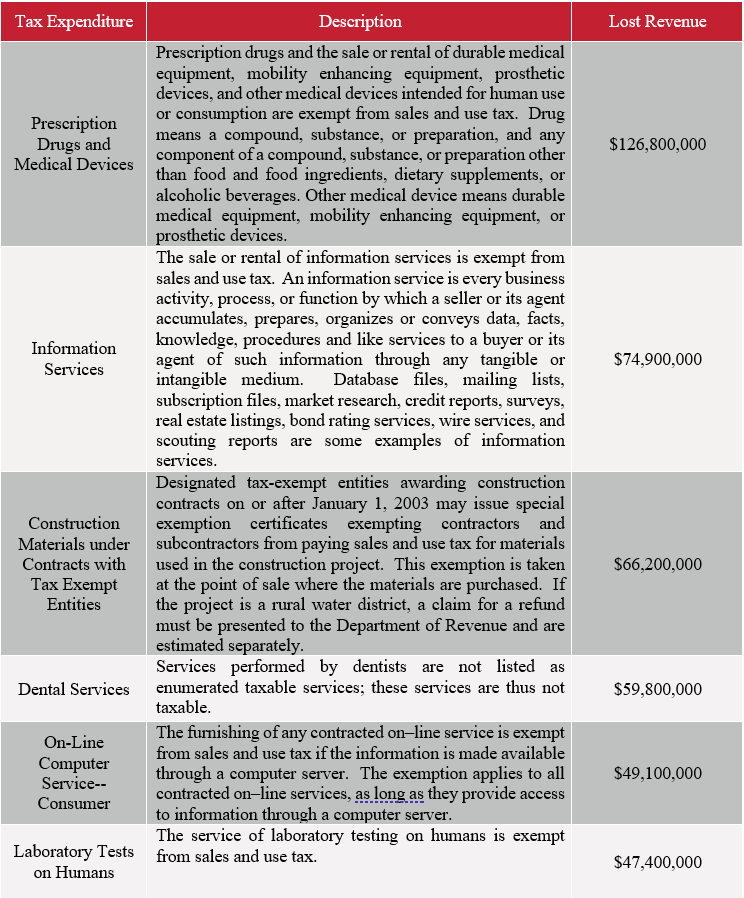 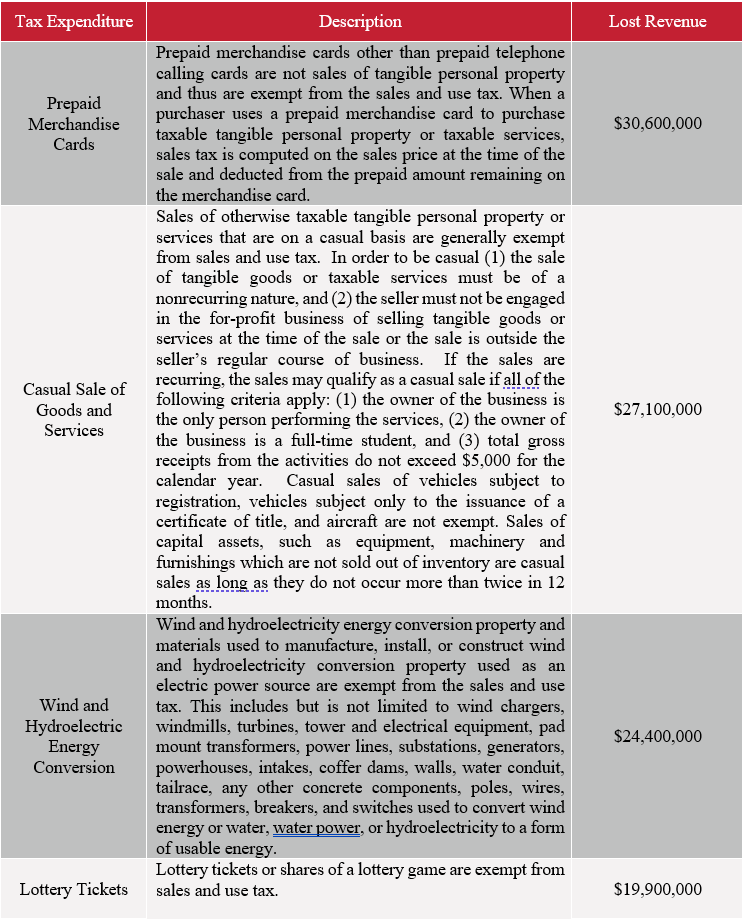 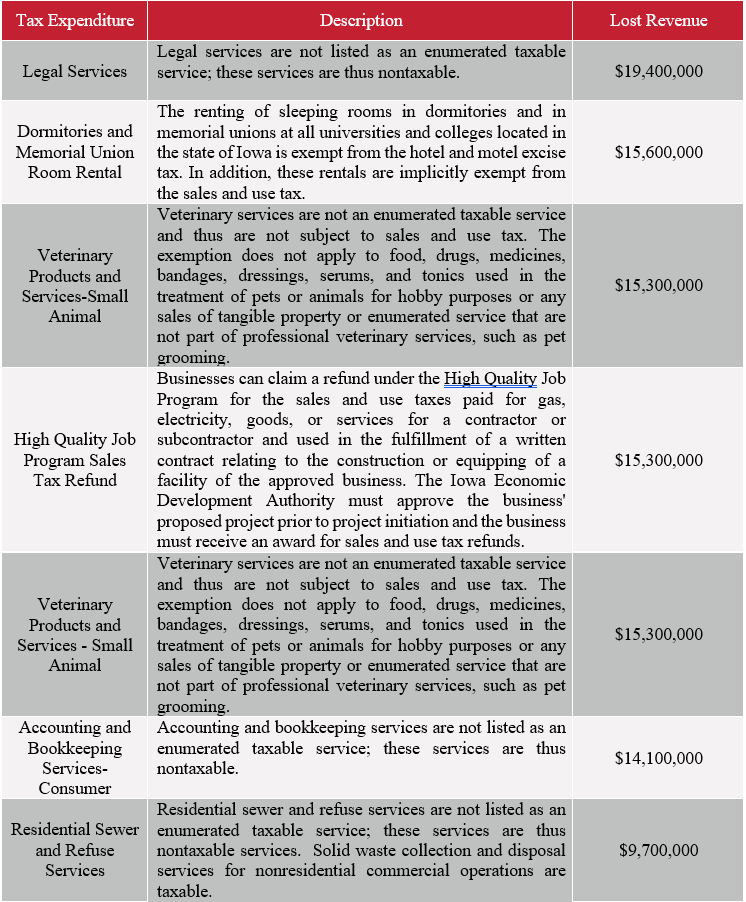 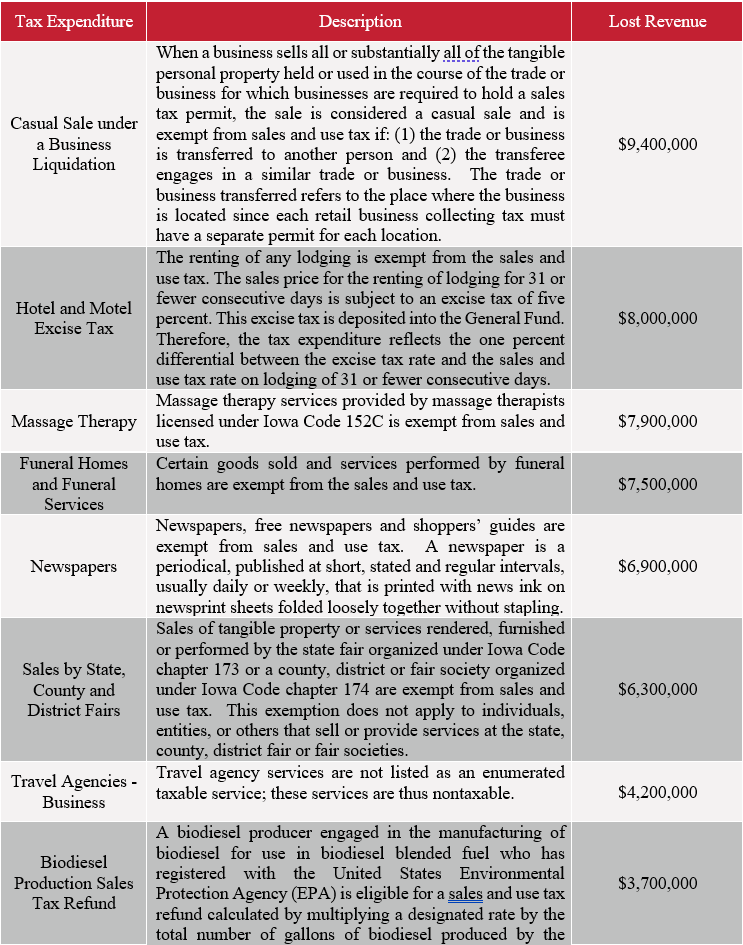 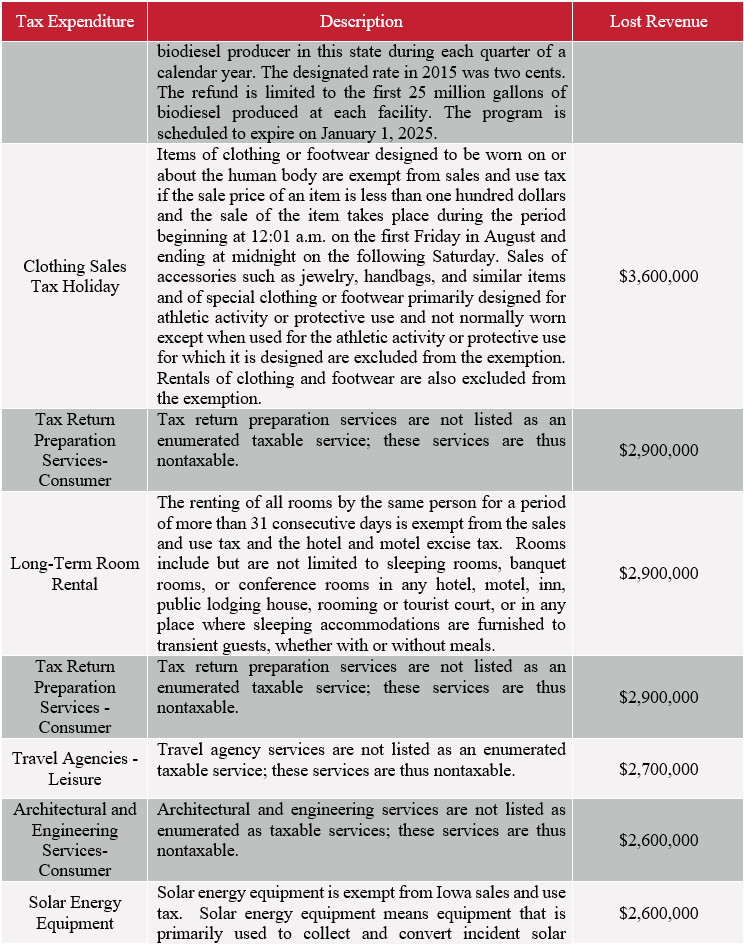 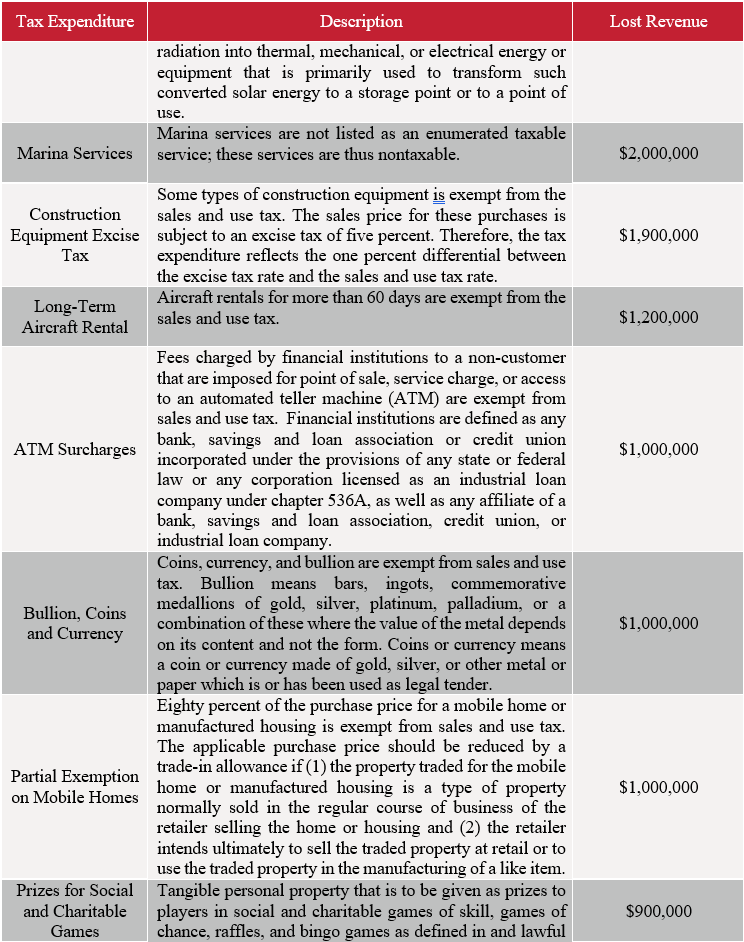 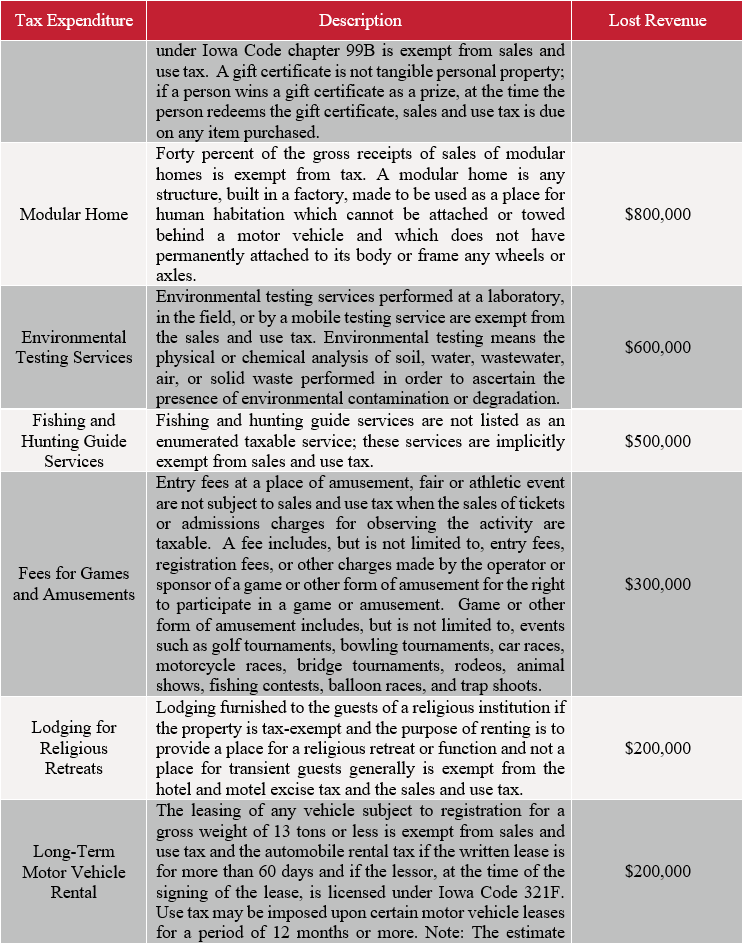 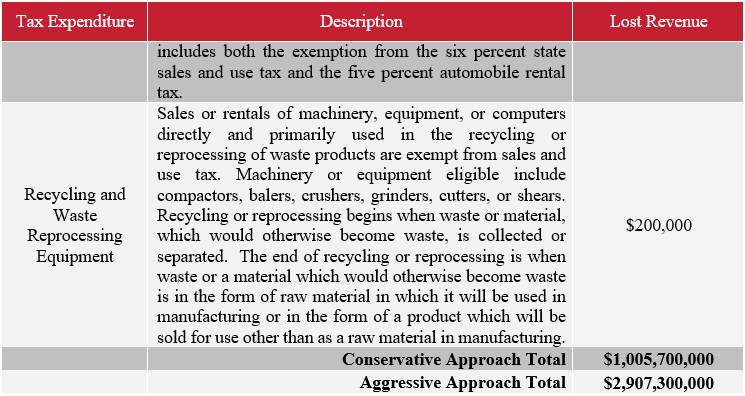 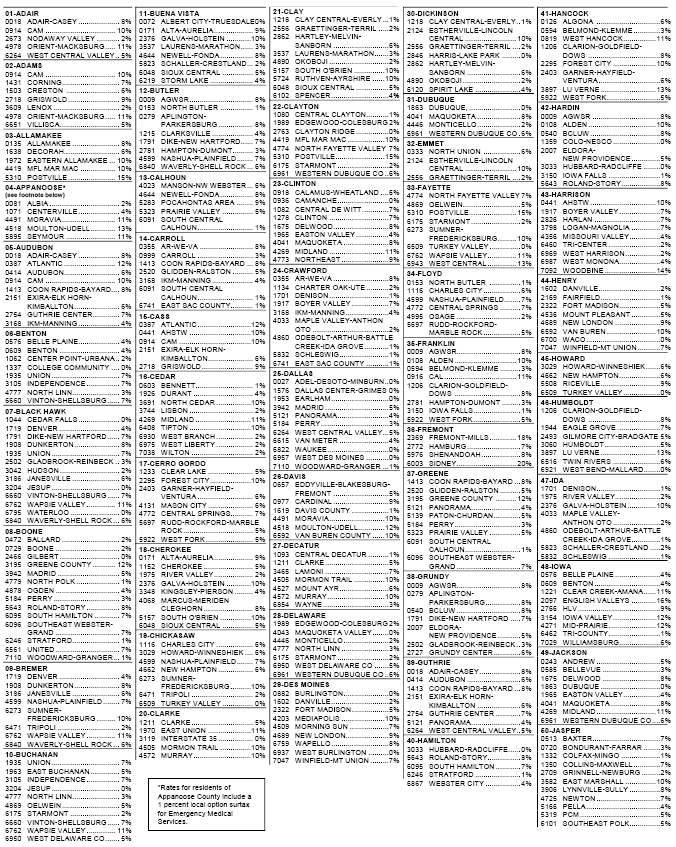 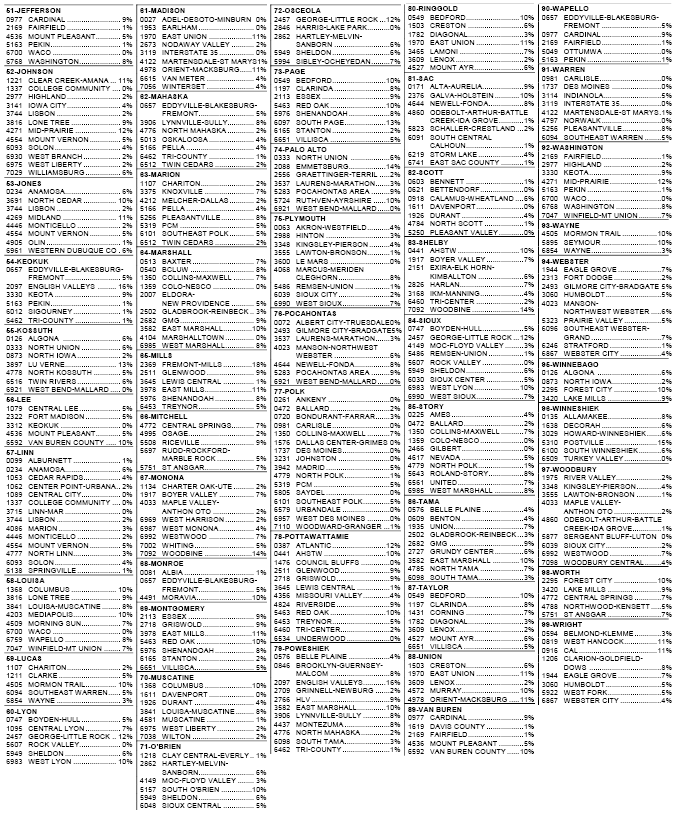 [2]  The Economic Research Center’s dynamic scoring model. Note: GDP, tax revenues, consumption and investment in millions of 2012 dollars. Employment is full-time equivalent non-farm jobs. Difference from baseline results are rounded to the nearest $10 million for GDP, tax revenue, consumption and investment and are rounded to the nearest thousand for employment

[4]  The Economic Research Center’s dynamic scoring model. Note: GDP, tax revenues, consumption and investment in millions of 2012 dollars. Employment is full-time equivalent non-farm jobs. Difference from baseline results are rounded to the nearest $10 million for GDP, tax revenue, consumption and investment and are rounded to the nearest thousand for employment

[7]  The Economic Research Center’s dynamic scoring model. Note: GDP, tax revenues, consumption and investment in millions of 2012 dollars. Employment is full-time equivalent non-farm jobs. Difference from baseline results are rounded to the nearest $10 million for GDP, tax revenue, consumption and investment and are rounded to the nearest thousand for employment

[8]  Iowa Department of Revenue, Economic Research Center calculations (Tax expenditures as displayed in this table are not adjusted for inflation). 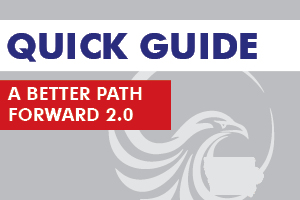